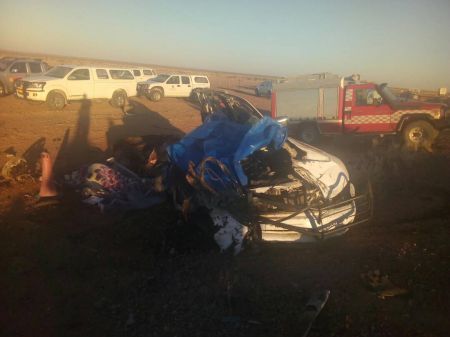 A horrific head-on collision between a bus and a double cab bakkie claimed the lives of two men and two women on Wednesday on the B1 national road between Mariental and Keetmanshoop.

Clay said it is alleged that the driver of a bus, which had about 35 contract workers of a Rosh Pinah mine on board, lost control after the right front tyre burst.

The bus went over to the other lane and collided head-on with a Nissan Hardbody Double Cab, killing all four occupants, he said.

He said the impact was so severe that the pickup was cut in two pieces and the bodies of the four deceased badly damaged.NAMPA