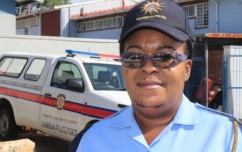 A 41-year-old man died in the early hours of Monday after the shack he was sleeping in caught fire and burned down completely at Okahandja.
The deceased has been identified as Willem Rooinasie.
The fire is thought to have been cause by a candle.
Spokesperson of the Namibian Police Force in the Otjozondjupa Region, Warrant Officer Maureen Mbeha on Monday told Nampa the incident occurred around 02h10.
No foul play is suspected and an inquest has been opened at the Okahandja Police Station, said Mbeha.
Rooinasies relatives have been informed of his death.
In a separate incident, 32-year-old Anna Muronga died on Saturday after the double cab she was travelling in overturned on the road between Grootfontein and Mururani.
Mbeha said the vehicle with 12 occupants, including its 38-year-old driver, was headed towards Mururani from Grootfontein.
It is alleged that about 15 kilometres before the Mururani police checkpoint, the left rear tyre came off the vehicle and the driver lost control, causing it to overturn several times.
Muronga died on the spot, while four other occupants sustained injuries, she said.
Murongas next of kin have been informed.
Eleven people were taken to the Grootfontein State Hospital for treatment and one of them was transferred to the Katutura Intermediate Hospital in critical condition on Sunday.
Three of the accident victims are still admitted to the Grootfontein State Hospital in stable condition, while seven who sustained slight injuries were discharged from the hospital.
A culpable homicide docket has been opened against the driver at the Grootfontein Police Station and investigations in both matters continue.
(NAMPA)