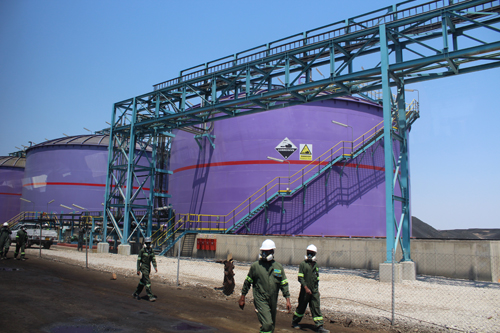 The plant is expected eliminate about 95 percent of hazardous emissions in the air. Construction started in 2013 with N$2.6 billion having been committed to the construction of the acid plant, while the overall amount invested in the realisation of the plant accumulated to N$3.9 billion.

The N$3.9 billion state-of-the-art sulphuric acid was officially inaugurated by President Hage Geingob, who stated that the project is one of the largest capital intensive investments in the country with modern high-technology equipment of a world class standard.

This investment is expected to ensure that there will be no emissions of sulphur dioxide into the air through the furnace stack, into the town of Tsumeb, or within the work areas of the smelter, which has for many years now affected community members in the surrounding areas.

The acid plant captures sulphur dioxide emissions that are part of the mineral smelting process and uses them to produce sulphuric acid, a critical component for the mining industry.

“It is, therefore, pleasing to note that our calls for increased beneficiation and value addition in the mining sector are being implemented by investors. The acid produced here will create business opportunities for TransNamib and other companies.

“These are the type of investments we value, investments that produce positive spillovers into the rest of our economy,” Geingob stated.

He further noted that Dundee’s investment is a clear indication that an investment of that magnitude signifies the manner in which government continues to support the promotion of investment in the mining sector by creating a stable and conducive business and political climate.

“Today we can confidently say that the Tsumeb smelter is close to full compliance with Namibian standards, pending the finalisation of the certification process, and I expect this process to be concluded expeditiously,” he said.

The plant is expected to be produce 230 to 280 thousand tonnes of sulphuric acid per year, which will be contained within the acid plant and transported in approved and secure containers to various destinations locally.

For over 50 years Tsumeb has endured unpleasant sulphuric dioxide fumes from the smelter operation, which have been blamed for the health problems of local residents and workers. These concerns led to Cabinet taking a decision in 2011 to conduct an investigation to find ways to resolve the situation and this led to the proposal to set up an acid plant.

“We saw the challenge and decided to use it as a business opportunity to use these gases to develop new enterprises that would improve the environment. This is further an indication of Dundee’s commitment to improving the environment, investing in the region, as well as creating employment,” stressed Dundee’s vice-president and managing director Zebra Kaseta.

He added that the project is just the latest in a series of investments that aim to upgrade the smelter to modern standards.