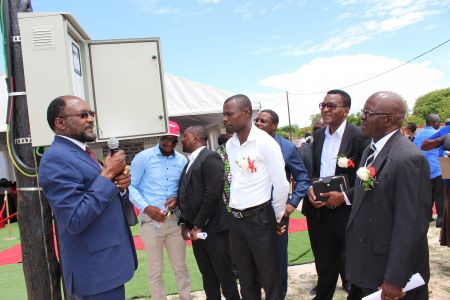 The Northern Regional Electricity Distributor (Nored), through its Corporate Social Responsibilities project, has electrified the Ekango Lahamulenge village in the Ohangwena Region to the tune of N.dollars 940 000.
This came to light during the official commissioning of the electrification of the said village on Wednesday.
The village forms part of the Ohangwena Region northern border town of Helao Nafidi.
As a regional electricity distributor, Nored will make continuous efforts and investments in the enablers of the rural economy, such as rural electrification, in order to improve the economic and social welfare of rural communities, said the chairperson of the Nored board of directors, Sacky Kayone, during the commissioning event.
Kayone said electrification of Ekango Lahamulenge was completed in March last year, while Eeshoke location, also in the Helao Nafidi Town, was electrified last year too.
According to Kayone, Nored electrified Eeshoke location at a cost of one million N.dollars. Nored has also invested close to N.dollars 315 000 in the installation of a high-mast light behind the Shell Service Station at the Helao Nafidi Town's Omafo suburb last year to provide an aerial lighting of the area and hence contribute to the safety of the residents and reduce the crime rate.
The residents of Ekango Lahamulenge and Eeshoke location can now have pre-paid electricity supply to their houses now that their areas have been electrified.
Fifteen jobs were offered to people living in this area to carry out tasks such as de-bushing, trenching and digging, Kayone stated, adding that certainly the project has enabled men and women from the surroundings to earn income in order to sustain their families.
Speaking at the same occasion, Helao Nafidi Town's mayor Eliaser Nghipangelwa indicated that the electrification of Ekango Lahamulenge and Eeshoke locations is a result of community demands.
The communities first approached the late councillor of the Ohangwena Constituency, Maria Kombwana, and then our town council to be provided with electricity supply, Nghipangelwa explained.
He noted that the electrification in question is a result of an agreement between Nored and his council, answering to the demands of the beneficiaries.
Ohangwena regional governor, Usko Nghaamwa, presided over the commissioning on behalf of the Mines and Energy Minister, Obeth Kandjoze, who could not make it due to other commitments.
(NAMPA)