Home >Blogs >admin's blog >Some flood victims at Onamhinda village on the outskirts of Oshikango were stranded Tuesday morning after their homesteads were flooded.

Some flood victims at Onamhinda village on the outskirts of Oshikango were stranded Tuesday morning after their homesteads were flooded. 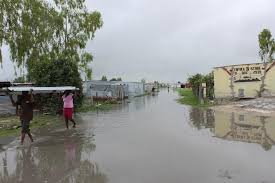 Some flood victims at Onamhinda village on the outskirts of Oshikango were stranded Tuesday morning after their homesteads were flooded.
Despite warnings of the floodwater said to be on its way from Angola over the weekend, the Oshikango Town Council appears to have not made provisions if the situation affects residents.
A media statement issued by the Disaster Risk Management Unit and Namibia Meteorological Services on Thursday said the flood situation in the central northern area of Namibia has reached alarming levels and citizens are advised to start taking precautionary measures.
When Nampa arrived at the scene a few metres from the village on Tuesday afternoon, people from five households affected by the flooding and officials from the town council were in dispute over whether to erect temporary shacks there.
One of the affected residents, Nikodemus Andreas, told Nampa they were told the land across the road is private property.
“The councillors told us we were supposed to have prepared for the water in advance because we were informed the flood would come, but now we have no idea where to go.”
Andreas added they also do not have transport for their soaked belongings.
Polofilia David noted that some of their belongings were stolen while they were moving some of it to dry land.
“We are here because of their unpreparedness and now they are chasing us away from here, where do they expect us to go if they are the ones supposed to help us?” David said.
Oshikango Councillor, Willem Namundjebo told Nampa on Tuesday an area has been identified for the affected people’s relocation and preparations are at an advanced stage.
“We did not expect the water to arrive and affect people so soon so we did not erect any tents yet.”
Namundjebo said as soon as the council finds out how many people have been affected, they will be able to determine how many tents and other facilities will be needed.
The nearby Katwitwi settlement was also affected and half of the open market is non-operational on since Tuesday.
Vendors at the market are highly disappointed as some of them have been forced to close their businesses until the water subsidises.
It could however take a while as more water is expected from Angola.