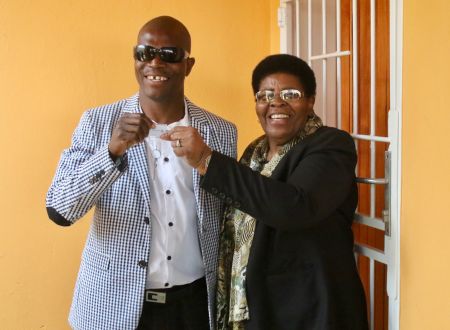 Standard Bank Namibia on Monday handed over a house built through its Buy-a-Brick initiative to Paralympic Games medallist Ananias Shikongo.
Standard Bank resolved to build the house, worth N.dollars 500 000, after Shikongo won a gold medal in the 200 metre race at the 2016 Paralympic Games in Rio de Janeiro, Brazil.
He also won two bronze medals in the T11 100 metre and 400m, respectively.
The house was built by the National Housing Enterprise in Katutura Greenwell Matongo residential area.
Speaking during the handover, Shikongo said his life has been transformed by Standard Bank and he hopes many young Namibians will see his achievements as a motivation to join sports.
It was not an easy journey and credit should be given to my teachers, coaches and all those who supported me in achieving my dream which led to Standard Bank and NHE giving me a house today, he said.
He said the gesture proves how much they appreciate what he did for the country as an athlete.
I call upon young Namibians to start competing in sport rather than forming groups that grabs people's phones on the streets as that life will not have a good ending for them, Shikongo said.
Deputy Minister of Sport, Youth and National Service, Agnes Tjongarero called on Shikongo to look after the house.
It's not easy nowadays to acquire a house and I call upon Shikongo and his family to look after this property well... I don't want to hear Shikongo sold the house after how many years as you know the value of this property will keep on increasing, she said.
(NAMPA)