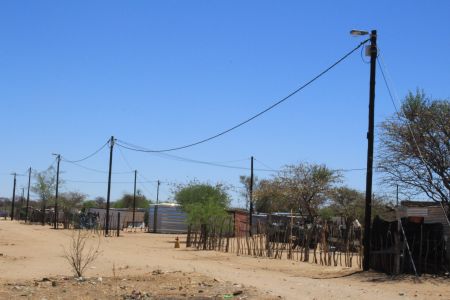 The Walvis Bay Corridor Group (WBCG) combined efforts with Orange Babies Namibia Foundation (OBNAM) to provide much-needed wellness testing services at Okahandja's Vyf Rand informal settlement.
The event which took place earlier this month saw over 100 residents of this vulnerable community receiving general biometric screening and HIV testing.
A media statement on the initiative issued by the WBCG on Wednesday said in total, 109 community members participated in the campaign, with 84 consenting to be tested for HIV.
Home to one of the poorest communities in Namibia, Vyf Rand has no established healthcare facility.
WBCG Wellness Service Project Manager, Edward Shivute said the WBCG began visiting Vyf Rand in 2018, after teaming up with Orange Babies, a registered Namibian Welfare organisation that has an established presence in the area.
Aligning ourselves with foundations like Orange Babies Namibia Foundation allows us to reach more remote communities along our corridors, said Shivute.
Amongst its many approaches, the WBCG wellness project operates mobile wellness clinics in an effort to address the rudimentary health needs of hard to reach populations and other mobile communities along the Walvis Bay Corridors.
The two entities joined forces to compliment and further support each entity's strategic objectives.
The partnership focuses on collaborative activities to provide community-based HIV prevention, testing and treatment services to vulnerable communities who do not have the necessary resources to access health services at other health centres.
Consequently, several joint HIV testing outreach campaigns have been conducted in Otjomuise and Vyf Rand over the past year.
OBNAM mobilised the community prior to the campaign and this enabled the WBCG team to reach as many people with HIV testing and linkage-to-treatment services, the statement noted.
In order to curb the stigma associated with HIV testing, the testing services in Vyf Rand also included general biometric screening for cholesterol, glucose, diabetes, hypertension and body mass index, while community members who tested HIV positive were initiated on ART the same day.
Furthermore, community members who were perceived to be particularly vulnerable to HIV infection based on their risk assessment were offered pre-exposure prophylaxis to protect themselves against HIV infection, WBCG said.
(NAMPA)