A 72nd-minute goal by Peter Shalulile 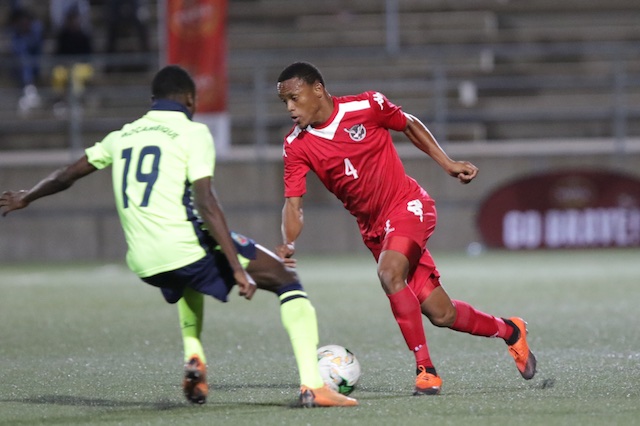 A 72nd-minute goal by Peter Shalulile gave the Brave Warriors a valuable victory against Mozambique on Tuesday night, and brought their dream of qualifying for next year's African Cup of Nations' finals one step closer.

On an electrifying evening, when even a power failure could not stop Namibia's charge, they scored their second victory within four days against Mozambique, which now puts them level with Guinea Bissau at the top of Group K, and just one win away from qualifying for Cameroon next year.

An emotional coach Ricardo Mannetti knelt and prayed on the pitch at the final whistle, and at the press conference afterwards said the victory was for the whole nation.

“This is hard work, but God will never overlook his people if they stay with Him. This is not only the team's victory, this is for everyone, for every Namibian. This is electrifying stuff, it's beautiful stuff to witness, and it's a beautiful time to be alive,” he said after the match.

Mannetti paid special tribute to his players, saying it was an honour to be their coach.

“We have a beautiful bunch of players. The ones who were also in isolation over the years, they came back, they wanted to be part of this process, and now we can safely say we have a complete team with a lot of depth and character. I'm just fortunate that these boys make me a good coach because they want it more than anyone else, and for me, it's such a pleasure to coach this bunch of players,” he beamed.

“I just want to say to all the players, I love you. I cried in Mozambique, I was in tears after the game, and today it's just a different feeling; it's just more special to do it in front of your home fans. Thanks a lot to all the fans out there for supporting your team,” the gaffer added.

Namibia started erratically, with passes going astray due to poor communication between the midfielders and forwards, while especially Shalulile struggled to find his rhythm early on.

Still, Namibia was doing most of the attacking, with Absalom Iimbondi, Willy Stephanus and Petrus Shitembi working hard in midfield, while striker Sadney Urikhob was a handful for the Mozambican defence with his constant pressure.

A power failure delayed the start of the second half for about 10 minutes, but Namibia didn't let it break their stride as an incisive attack by substitute Deon Hotto led to an early corner.

Another substitute, Wangu Gome, also made an immediate impact, and Namibia finally broke the deadlock with a great goal when Stephanus whipped in a cross from the right, and Shalulile showed fine control to chest it down and volley high into the net.

The drama continued unabated in the final stages when Namibian defender Denzil Haoseb received a second yellow card and was sent off, while Mozambique's Dayo Antonio headed in from a free kick, but the goal was disallowed for offside, and Namibia held on for a thrilling victory.

The victory now puts them level with Guinea Bissau at the top of Group K on seven points, while Zambia and Mozambique are on four points each. With two matches remaining against Guinea Bissau and Zambia, Namibia just need one victory to qualify for Cameroon, but Mannetti warned that they had not yet reached the target.

“It's not over - we set a target for ourselves to get to 10 points, and we are now on seven. We haven't qualified yet, so let's stay focussed. We still have Guinea Bissau to play at home, and it will be sweet if we can do it in front of our home fans to qualify for Afcon again,” he said.