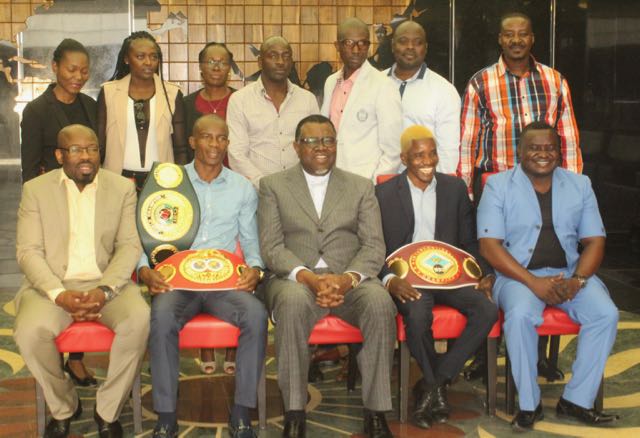 Julius Indongo (2nd left in front) seen with President Hage Geingob and other members of the Nestor Sunshine Tobias Boxing and Fitness Academy, during a courtesy call to State House.

WINDHOEK – President Hage Geingob on Thursday advised Julius 'Blue Machine' Indongo to always protect himself during his upcoming fight against Ricky Burns in Glasgow, Scotland next month.
Speaking during a courtesy call at State House, Geingob paid tribute to Indongo, saying his December 2016 win in Russia against Eduard Troyanovsky made the world stand up and take notice of Namibia as a country, as well as a boxing nation.

“When I was watching the fight, I thought you were scared in a foreign country without any Namibian supporting you. I got scared when you knocked him out because I thought he would stand up and come after you hard,” said Geingob.

Geingob said his fear stemmed from the possibility of a fighter being knocked down in the first round but still coming back to win the fight.

He asked the double world champion if he was ever scared of his opponents and if the punch that knocked out his Russian opponent was a fluke.

Indongo responded saying he has been practicing the now famous punch for over three years, and many boxers have succumbed to that punch: two last year and one in 2015.

“That was not a lucky punch. As for fearing my opponents, no I do not; I'm a police officer by profession and police officers are never scared,” said Indongo.

Geingob advised Indongo to train hard and avoid being overconfident, as his opponents are now aware of his ability.

“We are proud of you as our champion and as a role model. We expect you to carry yourself like a true champion, so go to Scotland knowing that we are behind you,” said Geingob.

He is due to defend these titles in a unification fight against Burns, the World Boxing Association world light welterweight champion, on 15 April.