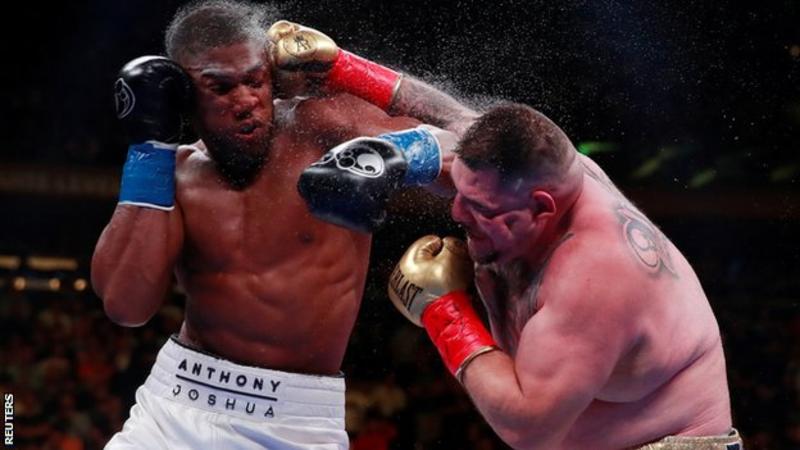 Unified world heavyweight champion Andy Ruiz Jr says he has not signed to fight Anthony Joshua in Saudi Arabia and hopes their rematch is in New York.

A 7 December rematch in Saudi Arabia was announced on Friday and Joshua's promoter Eddie Hearn told a news conference on Monday it was signed.

Ruiz did not speak or post about the bout on social media until Wednesday.

The 29-year-old told ESPN in Mexico: "I have not signed anything yet, we are negotiating everything."

Asked about a Saudi Arabia contest he said: "They want to do it there but we have to see where we negotiate with my team. I would like it in New York again."

In doing so, he walked away with the IBF, WBA and WBO heavyweight titles, becoming Mexico's first world champion in the division.

Joshua, 29, took up his right to a rematch and promoter Hearn has repeatedly pointed to Ruiz being signed to fight as a result of the fact a rematch clause was part of the first fight's contract.

Hearn has said Joshua's team contractually only need to let Ruiz "know the time, date and venue" and says the champion could face legal proceedings if the fight does not happen.

Organisers in Saudi Arabia have put forward a reported fee of $40m (£33m) to host the event but there has been criticism of taking a fight of such magnitude there given the country's human rights record.

Human rights organisation Amnesty International has said the move provides "opportunity for the Saudi authorities to try to 'sportswash' their severely tarnished image".

Ruiz is again a bookmakers' underdog for the repeat fixture but since his shock seventh-round stoppage win has stated Joshua is "not good at boxing".

Asked on Wednesday about facing Joshua again, he said: "I think he will want to run a little longer, move, but he is too big, he has many muscles and it will be very difficult for him."

There's a clear stand-off at the heart of an event which is as mouth-watering as it is controversial at the moment.

As Joshua and the team around him posted pictures of a 'Clash on the Dunes' fight poster last Friday, not a word was muttered from team Ruiz.

The champion's trainer Manny Robles told reporters there was "a reason" for the silence.

Then came Monday's news conference, one that showcased the intent of Saudi organisers to deliver.

But something seems amiss. In a sport where money talks, is Ruiz simply trying to hold out for a little more? During his career he has has fought in New Zealand and Macau, so heading overseas has not bothered him too much in the past.

It is worth remembering Ruiz begged Hearn for the chance to replace Jarrell Miller and face Joshua on 1 June. His life changed on that remarkable night and now, with world-champion status, he seems defiant in not giving Hearn the Saudi Arabia night he wants