Baby Warriors off to Mauritius 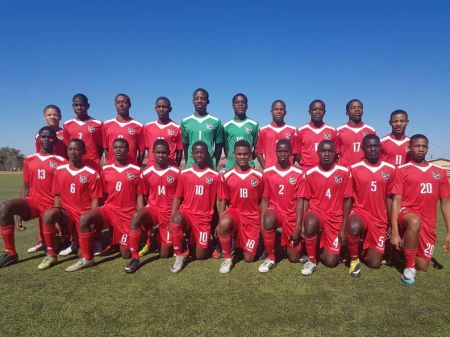 The Under-17 national football team, also known as the Baby Warriors, on Saturday left for Mauritius for the Council of Southern African Football Associations (Cosafa) U-17 Championship.
The tournament takes place from 19 to 29 July.
According to a media release availed to Nampa by the Namibia Football Association, the 2016 champions, who failed to defend their title in 2017, will be taking on Botswana, Seychelles and host Mauritius in Group A.
Namibia won the Cosafa U-17 Championship in 2016 after defeating favourites, South Africa in a 3-1 penalty shoot-out following a 1-1 draw in the final that was also staged in Mauritius.
They missed out last year due to a lack of funds.
They will open their account on Thursday as they face Seychelles at 10h00 at the St Francois Xavier Stadium.
They will then face Mauritius on Saturday at 15h00 and finish off Group A against Botswana on 24 July at 12h00 at Auguste Vollaire Stadium.
After weeks of intensive training and conditioning, the 2016 Cosafa Cup winning mentor and Head of Delegation this time around, Timothy Tjongarero is content with the players overall physical fitness levels, despite a few worries around their match fitness.
Another worrying aspect is the lack of harmony among the players, as our usual combinations are not yet clicking, but Im confident we will get there with time. For us it will be good to go as far as possible, hence this is a qualification game, we strongly need to work on the forwards and score as many goals as possible, Tjongarero said.
South Africa are in Group B along with Lesotho, Zambia and Mozambique, while Group C consists of Angola, Swaziland, Malawi and Zimbabwe.
The semi-finals will be on 27 July, with the Group A winners up against Group C winners and the Group B winners taking on the best loser.
The final will be on 29 July and the eventual winners will qualify for the 2019 African U-17 Cup of Nations to be held in Tanzania.
The technical team comprising coach Paul Malembu and his assistant Shipena Nakalondo finally announced the team of 20 players for the 2018 Cosafa Championship from the initial 32.
They are as follows:
Goalkeepers: Utupuka Kavita, Ikuaterua Mungendje
Defenders: Tjipenandjambi Kaputjaza, Promise Gurirab, Vincenco Ganeb, Bradley Hanixab, Thomas Bantam , Aidyn Eiseb, Giagino Geiriseb
Midfielders : Steven Damaseb, Esegiel Katjirijova, Prins Tjiueza, Tyrin George, Ndjiharine Katjivena, Penouua Kandjii, Edmar Kamatuka
Strikers: Jahrule Awaseb, Gonzales Tsubeb, Friedman Goraseb and Djorkaef Stein
(NAMPA)