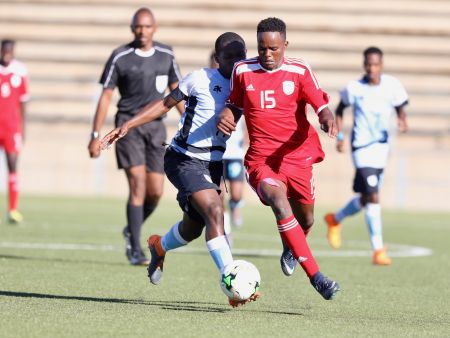 WINDHOEK, 22 APR (NAMPA)  Namibias Under-20 football team were on Sunday eliminated from the 2019 Confederation of African Football U-20 Africa Cup of Nations (Afcon) qualifiers after a one-all draw with Botswana.
The first round, second leg of the competition was played at the Sam Nujoma Stadium in Windhoek.
In the first leg played in Gaborone three weeks ago, the game ended in a 0-0 draw, which has now resulted in Botswana qualifying for the next round of the competition with an away goal advantage.
Botswana will meet Congo in the second round preliminary qualifiers.
Sundays match was played to about 300 supporters.
The Young Warriors found the going tough as their counterparts had more of the ball possession in the first half and created a number of scoring opportunities which did not find the back of the net.
Namibia were reduced to 10 men in the 37th minute when Johannes Hollombach was tackled by Kitso Mangolo of Botswana, but the Namibian player retaliated, which forced the referee to give him a straight red card.
Despite being a man down, Namibia managed to go into the half-time break 0-0.
In the second half, Botswana came out like a house on fire and found the back of the net after a brilliant sprint and individual play by Thabang Khuduga, who beat the Namibian midfield and defence for their opener.
With the home team trailing by a single goal, the coach rang in some changes to strengthen his middlefield which gave them stability and control over the ball.
Namibia managed to find their equaliser in the 77th minute after Hubert Mingeris long shot from a restart found substitute Bethuel Muzeu, who chipped the oncoming goalkeeper for an equaliser.
With only 13 minutes left in the match, the Namibian boys gave it their all, but could not find the back of the net and the match ended one-all.
Speaking to the media after the game, U-20 head coach Gerald Güther said his boys did not come to the party on the day.
We didnt start like a house on fire in the first half because some of our key players who we put our hopes on did not switch on, which came back to bite us in the second half, he said.
He added that his U-20 squad is still very young and they will now look forward to future competitions.
(NAMPA)