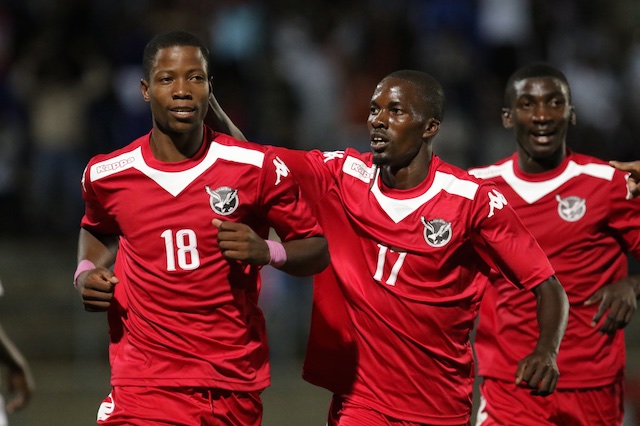 VITAPI Ngaruka and Benson Shilongo scored in the second half to complete a comprehensive comeback from the Brave Warriors as they beat Lesotho 2-1 in a thrilling international friendly match played at the Sam Nujoma stadium on Tuesday night.

In a game played in front of about 5 000 fans, Lesotho took the lead on 44 minutes through Sera Motebang. Namibian defender Vitapi Ngaruka equalised with a header from a corner on 64 minutes, while Benson Shilongo buried the winner on 80 minutes.

The Brave Warriors started the match with three new starters in Tura Magic midfielder Romeo Kasume, and defenders Aprocius Petrus of Eleven Arrows and Hubert Mingeri from Life Fighters and while Kasume struggled to find his feet earlier on, Petrus and Mingeri connected well with play, adding numbers in attack when necessary.

The entertaining game saw Lesotho draw first blood on 44 minutes through their top striker Sera Motebang, who beat Namibia's defenders to a high ball played through before leaving goalkeeper Max Mbaeva in his wake to score in an open net.

Captain Ronald Ketjijere and Dynamo Fredericks fought hard in midfield while Deon Hotto had his trademark runs down the left and Absalom Iimbondi tried his best to link up with striker Benson Shilongo.

At the start of the second half, Kasume was replaced by club-mate Itamunua Keimuine as the hosts looked to get back into it and it took them about 15 minutes to do so as Vitapi Ngaruka meet an Iimbondi corner to make it 1-1 on the night, much to the appreciation of those that packed the stands.

Lesotho then seemed to be playing for a draw before Shilongo capitalized on a quick Namibian free-kick to stamp the ball home from close range to make it 2-1, a lead the hosts could have added on.

Both sides made several changes to the playing personnel in the friendly match as they both prepare for Cosafa 2017 to be held in South Africa from 27 May to 7 June and the resumption of the 2019 Afcon qualifiers in September.

Stand in coach Ronnie Kanalelo dedicated the match to head coach Ricardo Mannetti who was absent due to family bereavement and was also impressed with the team's determination.

“The new boys that started grew in confidence as the game went on and in the end we also had to make changes to change the game and it happened for us. The team showed character today, it's not easy to come back from a goal down at home but the boys did and then went on to win. We dedicate this win to coach Mannetti whose family have been struck by tragedy and we keep him in our prayers,” Kanalelo said after the match. - nfa.org.na