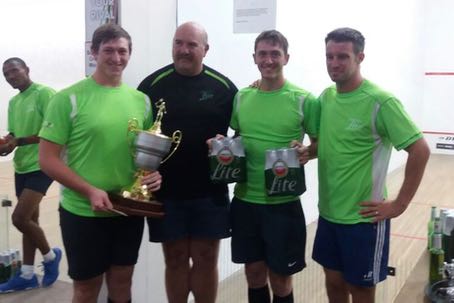 THE Forrest brothers, Andrew and Jason won the men's final of the 2017 Wanderers Amstel Lite Doubles Open squash tournament after beating the Berry brothers Steven and Nicholas 4-1 in the final.
The Forrest brothers got off to a quick start to win the opening two sets 11-8, 11-9, but the Berrys fought back to win the third 11-8.

The Forrests, however, finished stronger to take the fourth set 11-7 and win the match 3-1.

In 2016 the inaugural Wanderers Amstel Lite Doubles Open was a major success and was rated as the best and strongest doubles tournament in Namibia. The 2017 version, however, surpassed the 2016 version, having top Namibian players such as Andrew Forrest, Max Endjala and Jason Forrest taking part.

There was a concern that the mixed and women's draws would be weaker this year, with former Namibian number one, Carin Pretorius having moved back to South Africa.

The rapid improvement of the upcoming Lida-Marie Calitz, however, proved otherwise as the 16-year-old partnered up with Max Endjala to win the Mixed Cup.

The women's final was also a mouth-watering affair, as the favorites, Adri Lambert and Isabel Schnoor took on the experienced pair of Elmarie Kotze and Carla Nortje in the final.