GENDER-BASED Violence in Namibia was put in the spotlight 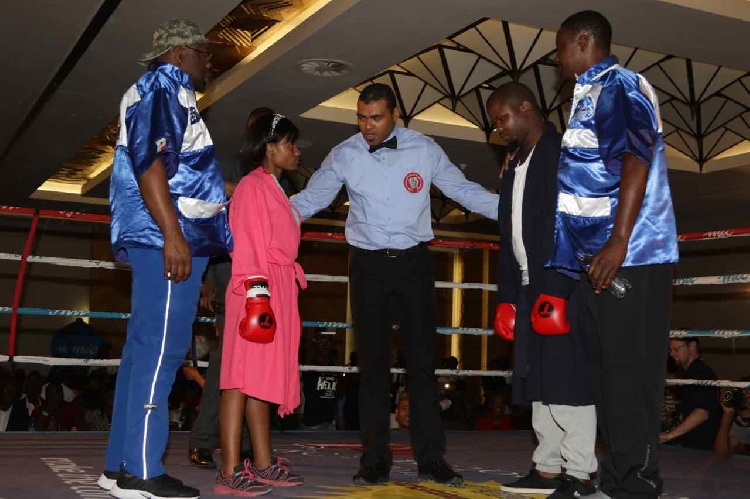 GENDER-BASED Violence in Namibia was put in the spotlight on 21 October 2017 with a rather unconventional campaign at the Champions in Action boxing bonanza in Windhoek.
As part of the marketing and build up to the bonanza, a mystery fight between 'Selma' and 'Michael' was also promoted, which raised a lot of concerns since amongst the public.

All was revealed on Saturday night though when the two protagonists stepped into the ring but before they could come to blows, the ring announcer read out a statement, raising awareness about gender-based violence in Namibia and promoting the Lifeline/Childline Namibia's toll-free 106 GBV helpline.

At a press conference in Windhoek on Monday, Mekondjo Erastus of Lifeline/Childline said the campaign had been very successful.

“Namibia's boxing community, together with LifeLine/ChildLine Namibia, took a stand against gender-based violence by putting two fake fighters in the ring – a man and a woman – and then publicly announcing their stance of boxers against violence,” he said.

“The campaign was the brainchild of Windhoek advertising agency, Advantage Y&R, who drummed up publicity weeks before fight night, with the male and female actors appearing as opponents in boxing posters advertising the event. The man was large, and dressed in a vest, whilst the woman was small, and clothed in a flimsy dress to highlight her vulnerability. Social Media was abuzz with speculation and outrage,” he added.

Erastus said that GBV had spiralled out of control in Namibia and quoting research done by Sister Namibia, said that up to one third of Namibian men believe that wife beating is justifiable.

Advantage Y&R's creative director Toufic Beyhum thanked Tobias for agreeing to be part of the campaign.

“I'd like to thank Nestor and his team for being so brave and supporting this campaign, because they received a lot of criticism in the buildup, but at the end everyone got the message.”

Tobias, meanwhile, said they were doing their bit to try and raise awareness of GBV.

“GBV is getting worse in Namibia and we are doing our part to try and create awareness about the problem. The man is the father of the house and is supposed to take care of the family. A man cannot fight a woman and in boxing you have to be the same weight and also the same gender,” he said.

“This is not the first time we are doing this and we'll keep on doing this because we need to create more awareness about the problem. Our boxers are well known and respected and the more we can talk about it the more we can help our nation,” he added.

Walter Kautondokwa who was the main attraction on Saturday night and notched up his 16th consecutive victory with a third round knockout against Meshack Mwankemwa of Tanzania, also supported the campaign.

“Men must respect their women. They are our mothers, our wives and our sisters and we must not destroy them because they take care of us,” he said.

“We will push hard for him to reach the top. On the latest WBO rankings he is rated sixth, but that was before he knocked out a good opponent on Saturday, so that will improve now,” he said.

“We are now preparing for the WBO convention next week and I put up a good motivation for him and our other boxers so lets see what happens,” he said.