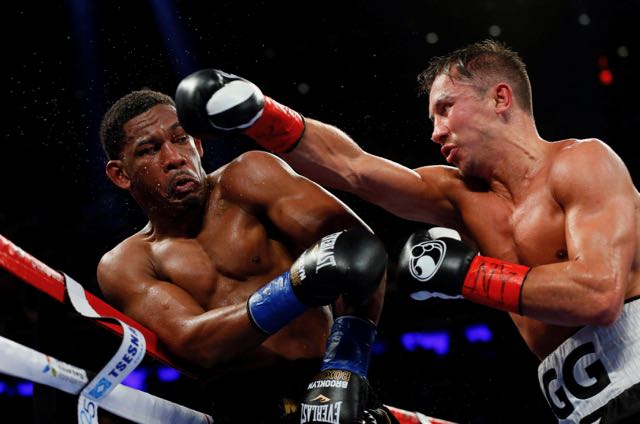 NEW YORK - Gennady Golovkin earned a unanimous decision over Daniel Jacobs on Saturday to retain his middleweight belts but not before boxing's knockout king was taken the distance for the first time.
Golovkin was forced to go 12 rounds as Jacobs gave the middleweight superstar all he could handle in front of a boisterous crowd of 19,000 at Madison Square Garden.

Golovkin retained his WBC and WBO belts as two of boxing's pre-eminent punchers put on an entertaining show against the best opponents of their respective careers.

"I couldn't destroy him," said Golovkin. "He is a very clean, very good fighter. It is my first test for 12 rounds."

Judges Don Trella and Steve Weisfeld both scored the fight 115-112 and Max DeLuca had it 114-113 for Golovkin.

Cancer survivor Jacobs was an underdog going in but he used his 10-pound weight and reach to his advantage and possibly provided the blueprint for Canelo Alvarez to use against the 35-year-old Kazakh in a future title fight.

Golovkin, who improved to 37-0, floored Jacobs early in the fourth round with two rapid fire overhand rights to record the only knockdown of the fight.