Griquas too good for Welwitschias 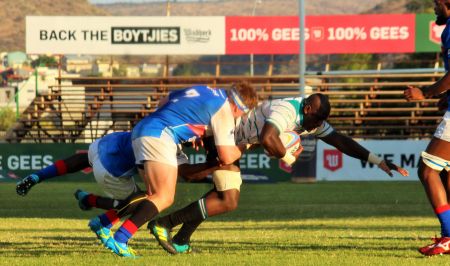 South Africas Tafel Larger Griquas proved too good for the Windhoek Draught Welwitschias on Saturday, emerging 61-24 victors from a 2019 SuperSport Rugby Challenge match played at the Hage Geingob Stadium.
The Namibians played good rugby in the first half as they restricted the current SuperSport Challenge log leaders to a 19-10 lead at half-time.
The Griquas were the first to strike when Victor Sekekete scored the opening try of the match to make it five points for his side in the eighth minute.
However, the home team responded in the 22nd minute with a try by captain Darryl de la Harpe, which was converted by Cliven Loubser to give Namibia a 07-05 lead.
Griquas then scored a try through Godfrey Ramaboe which was converted by Tinus de Beer, leaving the scoreboard reading 12-07 in favour of the visitors.
Namibia reduced the gap through a penalty by Loubser to make it 12-10 in the 32nd minute, but indiscipline undid their hard work as Thomasau Forbes was sin binned for illegal play in the 34th minute.
A minute later, the visitors took advantage of their superior numbers and scored a try which was not converted to leave the scoreline reading 19-10 at half-time.
The second half saw Namibia suffer another sin bin as JC Greyling was shown a yellow card and once again the Griquas took advantage to score a try trough Wilmar Arnoldi in the 49th minute to open the points gap to 26-10.
Three minutes later the visitors scored and converted a try through Anthony Volmink to make it 33-10 on the scoreboard.
Namibia reduced the gap when Desiderius Sethie scored a try and Loubser converted to make it 33-17.
The hard running Griquas then scored the try of the day when they defended well to prevent the home side from scoring a try and exchanged passes all the way to scoring their own try through George Whitehead, who took over the kicking duties and converted. That made it 40-17 on the scorecard.
The Namibians then scored their final try of the day which they converted to make it 24-40.
The Griquas then took over the show, scoring three more tries through Micheal Haznar, Sias Koen and Gideon van der Merwe, with Whitehead converting all of them.
In total, the Welwitschias scored three tries and three conversions and a penalty, while the Griquas scored nine tries and converted seven of them.
The Welwitschias will play their next match against the Down Touch Griffons at the Impala Rugby Football Club Stadium in South Africa on 19 May.
(NAMPA)