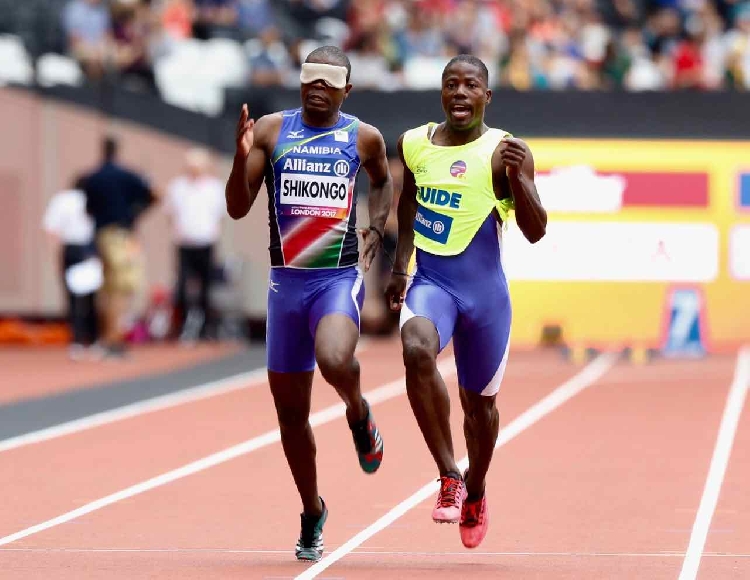 Ananias Shikongo and his guide Even Tjiviju.

WINDHOEK – NamPower has come to the financial aid of nine athletes and their three guides who are preparing for the 2018 International Paralympic Committee (IPC) Berlin Grand Prix to take place between 30 June and 1 July in Germany.

The power utility sponsored over N$400 000 to the Namibia Paralympic Committee (NPC) to take its athletes to Germany for the last IPC Grand Prix of the season.

The NPC will use these championships to get some of its athletes classified while at the same time preparing them for the 2020 Paralympic Games that will be held in Tokyo, Japan.

The nine athletes representing the country in Berlin will compete in track and field events at the Friedrich-Ludwig-Jahn-Sportpark.

Speaking to Nampa yesterday, Memory Kahlari, the NPC office administrator said this Grand Prix is important for Namibian athletes as it gives them an idea of what to expect ahead of the 2020 Paralympic Games qualifiers.

“We are taking athletes from Kavango East, Erongo, Zambezi and Khomas regions to this championship.

“Some of the athletes will compete at a Grand Prix for the first time, which will be a good learning experience for them,” she said.

Kahlari added that some athletes travelling to these championships will use this event to also be classified.

“We are grateful to NamPower's sponsorship, which we are using to pay for our flight tickets, accommodation as well as cover our meals while in Germany as we all know the government doesn't have the budget to cover for this competition,” Kahlari said.

Michael Hamukwaya will serve as the team manager while Barbara Fernandez will be the team coach. - Nampa