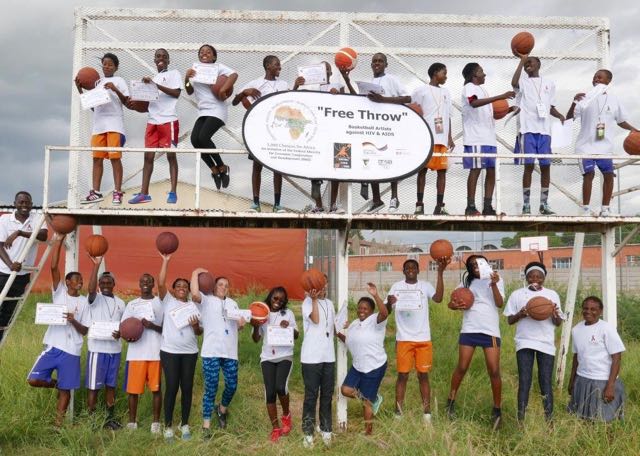 A total of 21 people took part in the Junior Coaches Basic Course on 23 and 24 March in Katutura, where they learned how to teach basketball.
The course is part of the project “Free Throw – Basketball Artists against HIV & AIDS” by the German Olympic Sports Confederation (DOSB) and the Deutsche Gesellschaft für Internationale Zusammenarbeit (GIZ) on behalf of the Federal Ministry for Economic Cooperation and Development (BMZ).

The participants came from Deutsche Höhere Privatschule (DHPS), Gammams Primary School, Haimbili Haufiku Secondary School in Eenhana as well as from the Basketball Artists School (BAS), where the course was hosted.

After two days of intensive training in dribbling, passing, shooting and life skills all participants received a certificate, T-shirt and whistle. Selected participants will be invited for an advanced course later this year.

According to local project coordinator Ramah Mumba, a second basic course will be offered on the weekend of 8 and 9 April and new registrations will still be accepted for this course.

Mumba, who is also voluntary secretary general of the Namibian Basketball Federation (NBF), conducted the course together with DOSB expert Frank Albin.

“We are very pleased with the commitment of the participants and hope that they will implement what they have learnt. We also urge all those who missed this course to register immediately for April, as this will probably be the last chance for this year,” said Mumba.