Kasaona up for Gladiators' challenge 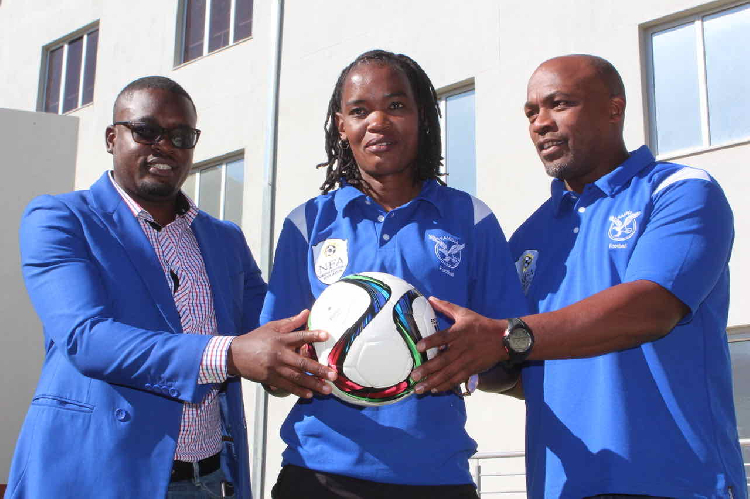 UERIKONDJERA 'Mammie' Kasaona is intent on reviving the Brave Gladiators' fortunes at the upcoming Cosafa Women's Championship after being installed as interim head coach on Tuesday.

The ex-captain and her assistant Robert Nauseb are tasked with leading the Gladiators from the group stages for the first time since 2008. The tournament is set to run from 31 July to 11 August in South Africa's Nelson Mandela Bay Municipality for the second year running.

Kasaona takes over from wily predecessor Brian Isaacs, who was redeployed to adviser for all women's national teams.

“It has been a dream [to coach the national team], which has come true. I'm ready,” Kasaona said during her unveiling at the NFA Girl's Centre on Tuesday.

“As a former captain, I am aware of the expectations. I know what it takes, and I walk the talk. I know how to encourage and motivate the players accordingly.

“I have a man [Robert Nauseb] behind me with massive experience, someone that I look up to. So, I think I have not been thrown into the deep end. It's not like I saw it coming, but we are up for it.”

The draw for the competition takes place today when the teams will learn their fate in the first round.

In four previous appearances at the Cosafa Women's Championships, Namibia' best showing came in 2006 when making their tournament debut and losing the final 3-1 to South Africa.

A semi-final exit two years later was followed by first-round exits in 2017 and 2018.

Kasaona, who named her training squad yesterday, plans to change that through thorough preparation.

The Gladiators play warm-up matches against the Young Gladiators (under-20), for whom Marvin Mbakera was also appointed interim head coach yesterday. The junior side also have an u-20 Cosafa tournament, which will take place at the same venue from 1 to 11 August, to prepare for.

“We have already started our unofficial training camp,” she said. “They know me, and I know them. I do not want to transform in any way. I will have the player-coach relationship with players.”

An uncompromising defender who has not formerly called time on her playing career, Kasaona is looking to mould her former teammates into a competitive unit.

“Winning is not the only important thing, but it is the only thing when it comes to tournaments. So, my objective is results. I'm not going there to participate, but to compete. The objective is to reach the next round,” she said.

Kasaona and Nauseb may yet land the coaching positions on a permanent basis should they prove a hit at Cosafa.

“It is a short-term arrangement. What will happen soon is that you'll see lots of advertisements from the NFA. We will advertise a number of vacancies, specifically the coaching department. They have been contracted only for Cosafa for now. But they can also apply once the vacancies are advertised,” said Fifa Normalisation Committee for Namibia chairperson Hilda Basson Namundjebo.

“When I got the call, I was really flattered, and didn't know what to say. But I didn't think twice, and accepted the call to serve the nation. I'm looking forward, and am excited to work with these girls,” Nauseb said.

The called-up Brave Gladiators are: