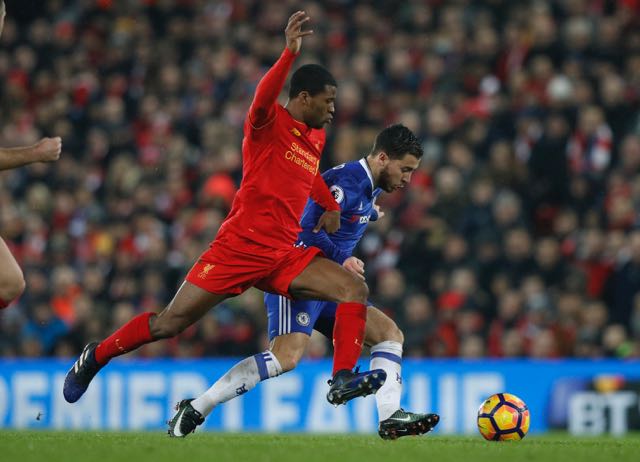 LIVERPOOL - Liverpool have a fine record against the Premier League's leading sides this season, which is just about the only solace for Jurgen Klopp as he prepares for Saturday's crucial clash with Arsenal.
The Reds' 3-1 defeat at Leicester on Monday exposed significant defensive weaknesses once again as a campaign that once promised much continued to unravel.

Liverpool, top of the league briefly in November, will start the weekend in fifth place, and could be sixth by kick-off, as Manchester United will move above them by beating Bournemouth in Saturday's early game.

Klopp's preferred 4-3-3 formation has been excellent against the rest of the current top six - in eight matches this season against Chelsea, Manchester City, Tottenham, Arsenal and Manchester United, Liverpool have won four and drawn four.

However, they have fallen short against teams in the lower half of the table.

Klopp has not been helped by a lack of stability in central defence, with Dejan Lovren absent for the last month with a knee injury.

Midfielder Lucas Leiva was paired with Joel Matip in the centre of defence at Leicester, and proved incapable of dealing with the pace of Jamie Vardy.

Even with Lovren fit, though, defence has been a problem for the manager, who has used 20 different centre-back combinations during his 17 months in charge.

Difficulties remain elsewhere, too. Striker Daniel Sturridge missed the Leicester defeat with a virus and, having made just five league starts all season, appears likely to leave at the end of the season.

There is one other sobering statistic for Klopp to consider; after 55 matches in charge, he has amassed 94 points, three fewer than his predecessor Brendan Rodgers had managed at the same stage of his reign.

Goalkeeper Simon Mignolet is trying to stay positive, saying: "You can use criticism as some sort of energy to get yourselves back up again and push yourselves even further and harder, looking forward to the next opportunity. That's what we have to do."

At Arsenal the issue of Arsene Wenger's future continues to drag on into March, with the Frenchman yet to confirm whether he will extend his 21-year stay beyond the end of the season.

The 67-year-old has announced he will make a decision with both his own and his club's interests at heart.

"My preference is always to remain the same," he said. "I'm not looking for jobs at other clubs, I'm just focused on me getting to the next level and trying to improve.

"I've been here 20 years and I have had many chances to leave. So I don't have to convince you my preference is always Arsenal.

"But of course I am objective and lucid enough to make the right decision for myself and the club as well."

Arsenal currently find themselves 13 points behind Chelsea but one point ahead of Liverpool going into the match at Anfield, not that Wenger is giving up on the title.

"We have to focus on our next game, we have a game in hand and things can change quickly," he said.

"You need exceptional results and Chelsea to fail so I think it is more important to focus on our next game rather than dreaming of coming back to Chelsea."

The Arsenal manager is also wary of playing his team's first game in 12 days on the back of Liverpool's poor performance at Leicester after a similar break between games.

"Liverpool is always high intensity, the fans are behind their team and they play at a good pace," Wenger said.