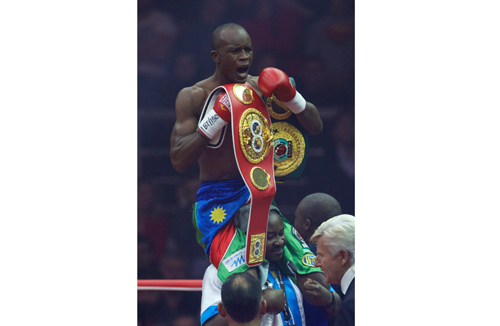 MTC Sunshine Academy boxing promoter, Nestor ?Sunshine? Tobias said Julius ?Blue Machine? Indongo is ready to face his American opponent, Terrence ?Bud? Crawford.
Tobias was speaking at a media conference in the capital on Tuesday.
?The champ is ready. A knockout will be a bonus but we are prepared for 12 rounds come 19 August,? he said.
Although Tobias and his team are well prepared, he however noted that the Welterweight Full Unification World Titles fight would be a difficult one for both Indongo and Crawford.
?Because both these boxers have been tested fit, they both have big hearts and for sure both boxers can punch very hard, but we are ready,? Tobias said.
The five-belt unification fight will be hosted in Nabraska, United States of America (USA).
The belts are the International Boxing Organisation (IBO), International Boxing Federation (IBF), World Boxing Association (WBA), World Boxing Organisation (WBO) and the World Boxing Council (WBC) titles.
Indongo is currently a unified light-welterweight world champion with IBF and IBO titles since 2016, and the WBA (unified) title since April 2017, while Crawford is a two-weight world champion with WBC and WBO titles since 2016.
Speaking at the same event, Mobile Telecommunications Limited (MTC) Chief Human Capital Corporate Affairs Officer, Tim Ekandjo said his company is offering four lucky customers an all-expenses paid trip to watch the boxing event live in the USA.
?We will pay for flights, accommodation, meals and the fight (boxing) ticket valued at US$ 128 (about N.dollars 1 735). All together the cost is N.dollars 60 000 for one winner,? Ekandjo said.
Winners have to take care of their passports and visa arrangement, with assistance from the MTC Sunshine Academy.
The public will have to buy a data bundle to get into the competition draw.
?The more you spend on the data bundle, the more entries you get into the draw,? Ekandjo said.
Bundles range from 40 megabytes (one entry) to 15 gigabytes (1 000 entries).