Nafpu on warpath against NFA, NPL, NSC and sports ministry 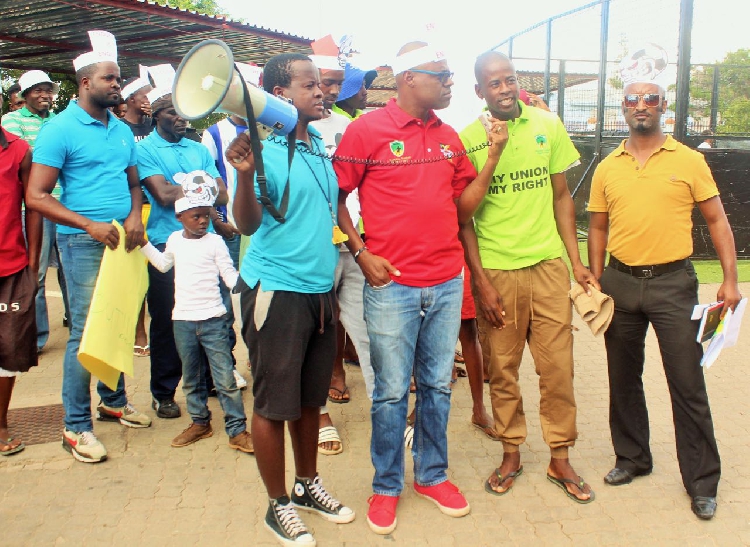 WINDHOEK – The Namibia Football Players' Union (Nafpu) has declared war against the Namibia Football Association (NFA) and Ministry of Sport, Youth and National Service, saying they have killed sports in the country.
Speaking during a petition handover at Football House in Katutura on Thursday afternoon, Nafpu Secretary-General (SG) Olsen Kahiriri said the line minister does not care about sports.

“He (Jerry Ekandjo) was supposed to be here or at least send representatives to receive the petition; maybe he does not know where Football House is,” said Kahiriri.

The petition that is also against the Namibia Premier League (NPL) administration, outlines demands including prioritising amendments in the Sports Act of 2003; that the NPL commence within 30 days; that Ekandjo be fired and replaced with someone 40 years or younger; and that NFA SG Barry Rukoro also be replaced.

He said Ekandjo had failed to appoint competent sports commissioners, because he does not understand sports and has never participated in it before.

The unionist also attacked the Namibia Sports Commission (NSC), saying it has failed to secure and defend sufficient finances from State coffers for sports, hence the diminishing funding of various sport codes of late.

Kahiriri said they are giving the minister 30 days to resubmit additional funding for the sports ministry, institute an inquiry into affairs of the NSC, and appoint a technical committee to kick-start amendments of the Sports Act.

He said the NSC had failed to intervene in the conduct of the NFA after numerous complaints.

“We demand that the commission carry out their mandate as they avail millions of tax payers' funds to these institutions. These demands are in line with the NSC Act section 28 (1) of 2003.”

Kahiriri gave the institutions 30 days to respond to the demands. Failure to do so, he said, will lead to the union instituting court proceedings against them.

Over 30 protesters consisting of union members, football players and NPL clubs were at the handover.