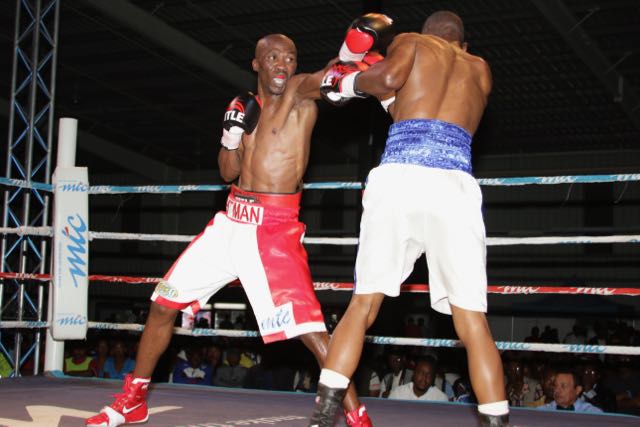 Fighting at a packed Ramatex hall, Naidjala got off to a good start, displaying quick hand speed and sharp combinations in the early rounds.

Ngonya, however, opened up a cut under Naidjala´s left eye in the fourth round, and things got worse for Naidjala when he got cut on his right eyebrow after a clash of heads in the eighth round.

With blood seeping out of the wounds, Naidjala was on the back foot for the rest of the fight while Ngonya upped his attacks with sharp jabs and combinations.

Naidjala still landed some good blows with short bursts of speed, but Ngonya grew stronger as the fight progressed.

The fight was quite evenly balanced going into the final rounds, but Ngonya made sure of the outcome when he knocked Naidjala down to the canvas in the 11th round, and then followed it up with two more knockdowns in the 12th round.

Naidjala complained that he had slipped, but the referee was not convinced, and when the judges' scorecard came they, too, were not convinced with Naidjala's performance, giving Ngonya a unanimous points decision, 113-112, 115-110, 116-109.

The rest of Namibia's pugilists, however, gave winning performances, with 'The Hitman' Moses leading the way.

His original opponent, Benoit Vela of the DRC was withdrawn at the last moment after failing a medical test, but promoter Nestor Tobias managed to find a more than suitable replacement in Crispin Moliati.

The 27-year-old Malawian gave a courageous performance, displaying a quick jab, while he went toe-to-toe with Moses on a few occasions.

Moses, however, was a cut above, raking in the points with his snappy jab and quick combinations, while he had Moliati in trouble a few times with some big blows.

The end came one minute 40 seconds into the seventh round when Moses put Moliati down with a powerful right hook, and although Moliati managed to get up, he was clearly shaken and the referee stopped the fight.

In the fight of the night, Sakaria Lukas retained his WBO Africa featherweight title with a brave and powerful performance against Oscar Chauke.

The fight exploded into action in the third round when Lukas put Chauke flat on his back with a big right hook, but Chauke managed to get up and came back with a vengeance.

He caught Lukas with a strong hook that buckled his legs, but the bell came to the Namibian's rescue.

In the fourth round Chauke once again shook Lukas with a tremendous hook, but the Namibian came back strongly and finished the round with some big combinations.

The hectic tempo continued unabated as both boxers gave it their all. In rounds eight and nine they had the crowd up and cheering wildly as they slugged it out toe-to-toe in the centre of the ring. Lukas took some huge blows, but showed great courage and came back strongly in the final rounds.

Walter Kautondowka retained his WBO Africa middleweight title and his unbeaten status, but he was given a tough workout by the rugged Sebyala.

After a slow start, Kautondowka started landing some big body shots by the third round, but Sebyala fought back bravely and opened a cut above Kautondowka's right eye in the fifth round.

Kautondowka upped the tempo from the seventh round and caught Sebyala with a big hook in the eighth, and by the ninth round Kautondowka's big blows started to tell.

Sebyala fought back bravely, but the end came in the tenth when he went down from a hook to the body, and although he beat the count, the referee stopped the fight.

Jeremia Nakathila made a quick and victorious return to the ring after his defeat to Evgeny Chuprakov of Russia four months ago when he beat compatriot Varde Ndayambekwa on a first round TKO after 2:30 minutes in a super lightweight fight.

The rest of the results were as follows:

Immanuel Kamungandjela of Namibia beat Limbani Masamba of Malawi on points (59-54, 59-54, 59-54) in an international welterweight fight.

Ebenestus Kaangundue of Namibia beat Charles Misanjo of Malawi on points (58-54, 57-55, 58-54) in an international welterweight fight.

Timoteus Shiluula of Namibia beat Tinashe Mutodza of Zimbabwe on a fourth round TKO in a super bantamweight fight.

Andreas Amupolo of Namibia beat compatriot Jafet Amukwaya on a second round knockout in a bantamweight fight.