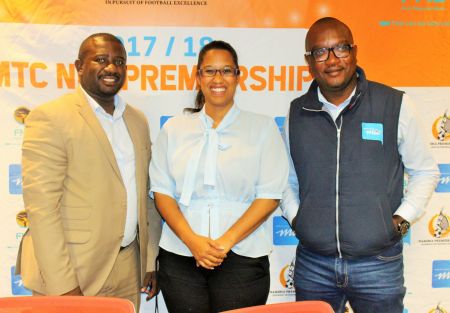 WINDHOEK, 28 MAY (NAMPA)  The Namibia Premier League (NPL) will host its 2017/18 awards at Safari Hotel in Windhoek on Friday.
Speaking at a media conference on Monday, NPL League Administrator, Joshua Tovey Hoebeb said seven categories will be up for grabs on the night.
The Chairmans Award will be decided by the chairman of the league at his own discretion. The Top Goal Scorer award is already decided as Panduleni Nekundi finished on top of the charts with 15 goals, one clear of his nearest rivals, Hoebeb explained.
Other categories include Premiership Player of the Season, voted for by the coaches of all 16 NPL teams, which carries prize money of N.dollars 30 000 and Players Player of the Year worth N.dollars 20 000, voted for by the players and captains of the 16 teams.
Coach of the Season, who is voted for by the 16 NPL coaches, will walk away with N.dollars 20 000, while Referee of the Season, decided by the referees department at the Namibia Football Association, will get N.dollars 10 000. The Assistant Referee of the Year will get N.dollars 5 000.
Hoebeb added that on the night, a total of N.dollars 2 220 000 will be given out to the various winners, and the official crowning of the league champions African Stars will also take place.
They will receive their N.dollars 1 million prize while the runners-up Black Africa will receive N.dollars 600 000.
Third-placed Mighty Gunners will walk away with N.dollars 300 000 and Young African who ended fourth will be rewarded with N.dollars 100 000 for their efforts.
The budget for the awards ceremony and prizes are catered for in the sponsorship package by joint sponsors Mobile Telecommunications Limited and First National Bank.
Below are the nominees for the various categories