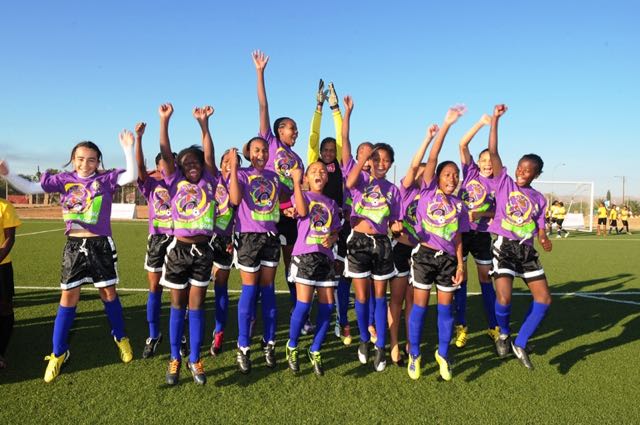 THE Independence Stadium in Oshakati witnessed yet another launching of the popular Namibia Football Association (NFA) Galz & Goals development program with over 600 girls in attendance as they embarked upon learning and playing together.
The Galz & Goals program has over the past eight years produced some of Namibia's biggest women football talents whose exploits were on show during the 2014 CAF Women Championships held in Windhoek.

The program visited Oshana region on Saturday as it was launched at the north central region to offer the girl child a platform to play and learn about a responsible life in an organized environment.

The festival, supported by Unicef, provided the opportunity to all adults and girls over the age of 16 to make use of the voluntary HIV testing program, testing of TB and sugar, blood pressure and other environmental testing and information booths.

Unicef, represented by their country representative Micaela Marquez de Sousa, also shared information with the young girls visiting their information booth on the day and mainly engaged in talks with the adolescent girls on their understanding of the program.

A five-day training workshop was held for 37 teachers prior to the festival explaining how to integrate life skills and health education into their training sessions and how to coach young girls in football through basic coaching courses conducted by Fifa instructor Jacqui Shipanga, and Sport2Life training by Score Namibia.

The launch event also had a football festival for under-13 to under-19 girls of the various schools in the Oshana region and the winners received trophies, medals and additional Adidas gift bags, thanks to Fifa. Talent was identified for further assessment.

The launch event was attended by the mayor of Oshakati Angelous Iiyambo and NFA president Frans Mbidi as well as representatives of various government departments.