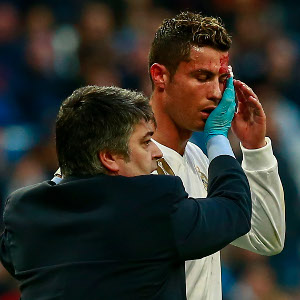 Real Madrid moved back into the top four of La Liga by thumping lowly Deportivo La Coruna 7-1 on Sunday, with Cristiano Ronaldo ending a miserable run of league form with a late double.

But Barcelona still extended their lead to 11 points – and 19 ahead of Real – as Lionel Messi and Luis Suarez both hit a brace in a 5-0 romp at Real Betis.

Ronaldo had only scored four league goals before Sunday's clash with third-from-bottom Deportivo, but the Portuguese added Real's fifth and sixth with a smart volley and a diving header as they moved back above Villarreal and into the Champions League places.

Villarreal had temporarily taken fourth with a 2-1 win over Levante on Saturday after beating Real at the Bernabeu for the first time ever last week.

Gareth Bale and Nacho also bagged braces each side of halftime and Luka Modric curled home a 68th-minute beauty as Real came back from a shock early deficit, a 23rd-minute tap-in from Adrian, to romp to an emphatic victory and ease the pressure on coach Zinedine Zidane.

The win leaves Real five points behind Valencia in third, after Marcelino's side had two players sent off in a shock 2-1 loss at lowly Las Palmas on Saturday.