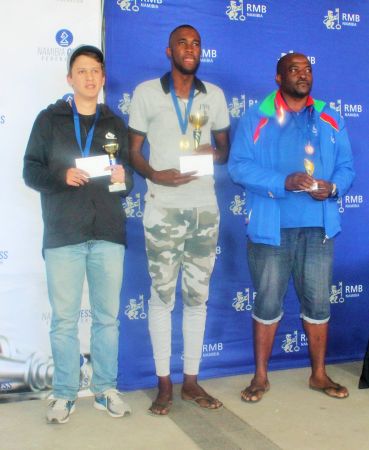 WINDHOEK, 07 JUL (NAMPA)  The Namibia Chess Federation (NCF) in collaboration with Rand Merchant Bank have hailed the 2019 Free For All Chess Tournament held in Windhoek a success.
Speaking to Nampa soon after the prize giving ceremony at the conclusion of the tournament on Sunday, the treasurer of the NCF Jonas Ipinge said the attendance was beyond their expectation.
We had 175 participants from an expected 180. This was beyond our expectations. Chess is growing as a sport in Namibia. The young ones had a great day playing the sport today, he said.
The tournament had five sections, namely; Beginners for kids under 10 years, Beginners, Amateurs, Professionals and Madala section (parents of chess kids).
In the Beginners for kids under 10 years old, Joseph Matengu emerged the winner with Rivolino Garoeb and Takunda Matengu coming second and third respectively.
In the Beginners category, Jason Feris was the winner with Elaih van Wyk coming second and Ryan Ouseb third.
The Amateurs section was won by Daniel Mouton while Simon Kaita was second and Sibusiso Angula third.
The professional tournament was won by Jossy Uapingene and Dante Beukes in second while Charles Eichab was third.
In the Madala section, Berdian Beukes emerged victorious, Veikko Shiweda was second and Noleen Mouton third.
Lischen Mentile and Uapingene were named as the most valuable players of the tournament for the women and men sections respectively.
The winners were awarded with certificates, meals and monetary rewards while every participant received a certificate.