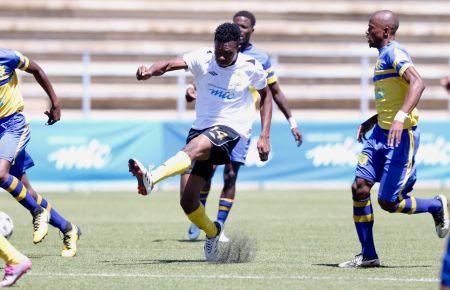 WINDHOEK, 06 FEB (NAMPA) 
Rundu based Namibia Premier League (NPL) outfit Rundu Chiefs Football Club have set their sights on finishing in the top eight at the end of the 2017/18 NPL season.
Chiefs are currently 13th on the log standing, levelled on 15 points with Civics. They collected five points from the three games they played in January and February.
In their remaining three league matches, they beat Mighty Gunners 3-2 last month, then collecting two points against Chief Santos and Young Chiefs over the weekend in Tsumeb and Oshakati respectively.
Speaking to Nampa after the completion of their remaining fixtures, Rundu Chiefs spokesperson Thomas Shapi said collecting five points from their outstanding games gave them hope to fight for a better position on the log.
I am not undermining our opponents in the second leg, but we have other smaller teams who will play their games in Rundu and our aim is to get all those maximum points, which will help us move up from our current position, he said.
Chiefs will play eight games at home and seven games away in the second leg of the 2017/18 NPL season.
Shapi added that the point difference between a team that is sixth on the log to bottom of the log is not big and if they collect maximum points in their home games, they will end up in the top eight at the end of the season in May.
We have a new coach and we are happy with the job he did in a short time. He is at the club to prevent the team from being relegated, but with the performance the team showed against Mighty Gunners, Santos and Young Chiefs, I really dont see what will stop us from fighting for the top eight, said Shapi.
With just two weeks before the second leg of the NPL kicks off, Shapi said the team will not entertain talk of relegation survival.
We are going to reinforce the team to be ready for all our opponents. We managed to move up the log when we completed our outstanding fixtures, so we dont even want to think of the relegation conversation as we aim to improve our standing when the second leg commences.
(NAMPA)