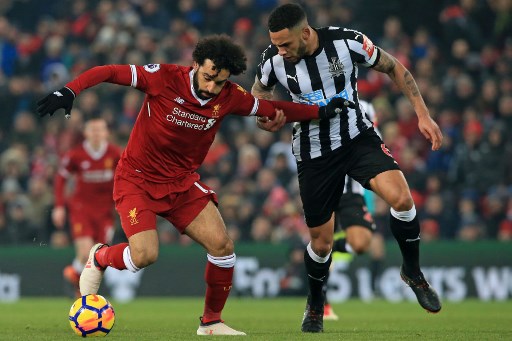 Mohamed Salah in action for Liverpool.

"If he beats my record I would actually bow down to him," Rush, a Liverpool club ambassador, told Britain's Press Association. "To score four goals in a final would be an incredible achievement.

"Fernando Torres and Luis Suarez were amazing in their first seasons at Liverpool.

"But I have to say Salah's been even better than them, not only his goals and assists but his all-round game. What I like about him is that he's such a humble guy - if someone's in a better position he passes the ball."

Salah became the most expensive player in Liverpool history last year when he joined from Roma in an initial £37 million deal, although January signing Virgil van Dijk has since taken the record.

But the 25-year-old has proved a bargain, with 11 of his goals coming in the club's march to the Champions League final.

He won the golden boot with 32 goals, becoming the highest scorer in a 38-game Premier League season.

And Rush has echoed those who believe Salah should be crowned world player of the year if Liverpool become European champions.

"The two best players in the world over a long time, without doubt, are Cristiano Ronaldo and Lionel Messi," Rush said. "But over the last season Salah has been the best player.

"He played a huge role in helping Egypt to the World Cup and what he's achieved at Liverpool has been amazing.

"If Liverpool win the Champions League he deserves the best player award, 100 percent," he added. - Nampa-AFP