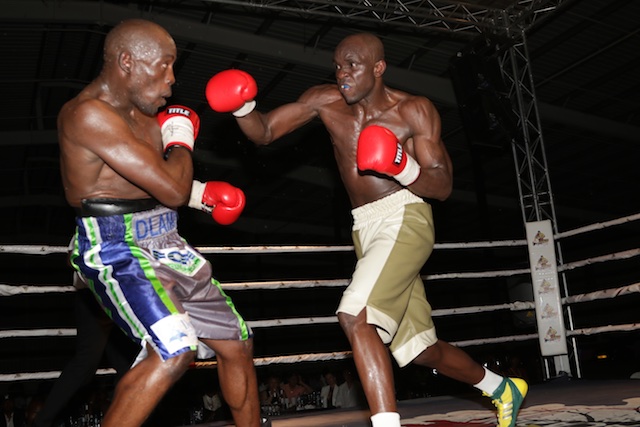 WINDHOEK – Salute Boxing Academy (SBA) has clarified the status of Lukas 'Demolisher' Ndafoluma's victory over Craig Cunningham in their middleweight clash during the Africa versus United Kingdom (UK) team boxing encounter in Manchester, England last Friday.
The two boxers were originally supposed to fight for the World Boxing Council (WBC) Middleweight International Silver title, but a delay in the issuing of a visa to the Namibian boxer, saw him arriving late in England, leading the fight to be changed to a Ceremonial International Challenge title match instead.

Armas Shivute, the spokesperson of SBA said the late arrival of Ndafoluma in England meant he could not manage the 72 hour weight check procedure.

“It is with great disappointment that he could not win the WBC International Silver title. Unfortunately our partners from South Africa who were organisers of the tournament delayed with the visas,” he said.

This procedure requires boxers to have their weight checked three times in a space of 72 hours.

“The organisers tried to persuade the WBC to wave the rule, but that request fell on deaf ears. It was not only Ndafoluma who was affected by this, but other boxers as well,” Shivute explained.

He added that since Cunningham lost to Ndafoluma, he was subsequently stripped of his WBC Middleweight International Silver title and the Namibian boxer became the mandatory challenger.

“The now vacant title will be contested for next year around February, either in South Africa of Namibia. We are still negotiating to try and bring the fight here, but there are factors such as financial implications,” Shivute said.

On his part, Ndafoluma said he was not disappointed by the events last week, adding that he was still happy with his performance on the night.

“For me the target is still the same. I am bringing that belt to Namibia. The setback was just one of those things that can happen to anyone,” he said, adding that he'll continue to work hard to ensure that he brings the title to Namibia.

Team UK secured the victory with a 3.5 to 1.5 winning margin and a return leg of Africa vs UK is expected to take place in Namibia in 2018. - Nampa