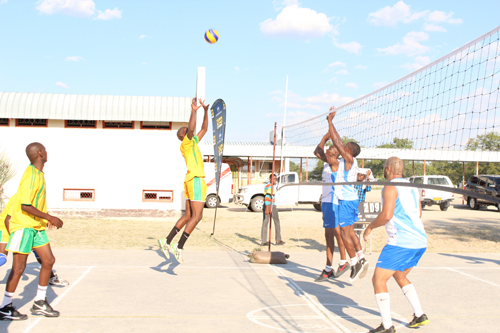 The Mweshipandeka High School sports field was a hive of activity with men and women in uniform showcasing their talent in both football and volleyball during the 24th Police Day commemoration in Ongwediva recently.

The games kicked off on a high note with female teams locking horns in volleyball, where Nakapele Volleyball team finished top to take home gold medals after defeating Nampol 2 sets to 1 in a mouth-watering final that kept spectators on the edge of their seats.

Nakapele males were left to lick their wounds after they were taught a lesson by Nampol Volleyball team when they were trounced 3 sets to 2 to claim a rare victory over the northern volleyball powerhouse.

In the football category, Nampol took top honours in that division when they defeated the NDF team on penalties after the match had ended in a 1-all stalemate.

The games were attended by Inspector-General of the Namibian Police Sebastian Ndeitunga, who is also Vice President of Interpol Africa, and visitors from countries such as Uganda, Rwanda and Nigeria.

The head of Nampol’s Public Relations Division, Deputy Commissioner Edwin Kanguatjivi, said the games were part of the police’s initiative to unite the people through sport across the board, while also bringing them closer to the police in an effort to combat crime and promote healthy living.

Posted by Anonymous (not verified) at 2:14 PM
Share Article: