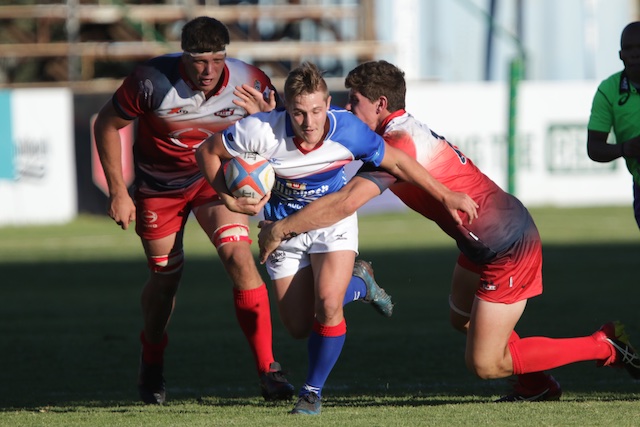 Welwitschias fly half PW Steenkamp in action against the Valke.

THE beleagured Welwitschias, still without a win and bottom of the North log, start the second round of the SuperSport Rugby Challenge with a tough away match against the Hino Valke in Kempton Park on Saturday afternoon.

After losing their opening four matches of the first round, the Welwitschias are bottom of the North log with only one bonus point, while they have scored a total of 74 points and conceded 211, at an average defeat of 52-18 per match.

It's not much of a consolation, but their best performance in the first round came against the Valke when they lost 39-7 in Windhoek, and coach Lyn Jones believes they can still do better against them.

“We were quite disappointed with our performance against them in the first round, but our preparation was not up to standard and we struggled to perform to expectations,” he said.

“We know it will be difficult to take them on at Kempton Park, but we are going with the goal of improving on our first round scoreline against them. We want to get more points and if we do that, anything can happen,” he added.

The Welwitschias' best hope for a victory in the competition will be against the Valke who are just one place above them in fourth position on the log on six points. The Valke have also struggled against the stronger teams in the group like the Blue Bulls, the Golden Lions and the surprise group leaders, iCollege Pumas, with their only win of the first round coming against the Welwitschias.

Jones has made four changes to his side that last played a fortnight ago when they lost 54-12 at home to the Pumas.

Jones said he had made regular changes throughout the series so far with the aim of strengthening the squad.

“I have been rotating the team with the aim of giving more players opportunities to strengthen our squad to make us more competitive in the Currie Cup competition later this year. Last year I was perhaps a bit guilty of not giving enough opportunities, so this year I want to make sure that no talent will slip through the net,” he said.

Johann Tromp, who was not included in the national squad that was recently announced for the upcoming Africa Gold Cup, will start at centre for the first time this year after playing on the wing, but Jones said the versatile back could play anywhere.

“Tromp is very versatile and could probably even play at scrum half. I'm a big fan of his and he has really impressed me. He plays without fear and he always wants to physically dominate his opponent,” he said.

Another player who has impressed Jones is fly half PW Steenkamp, who has made big strides since making his debut in the SuperSport Challenge this season.

“He had an outstanding match against the Pumas - he is composed, he tackles well and he is growing in stature. He took a brave decision to give up his studies in Johannesburg and return to Namibia to fight for a place in the national team,” he said.

The Welwitschias squad is as follows: