Welwitschias too strong for Tunisia in Africa Gold Cup 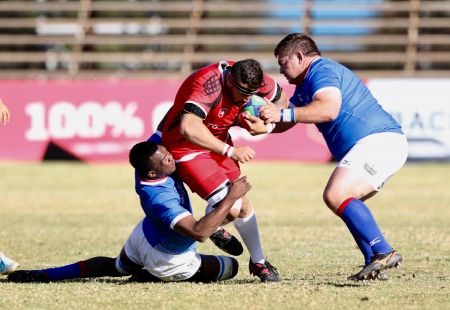 24 Jun 2018 11:00am
WINDHOEK, 24 JUN (NAMPA)  Namibias senior rugby team, the Welwitschias recorded one of their highest scores in a match when they beat Tunisia 118-0 in their second match of the 2018 Rugby Africa Gold Cup.
Namibia, the Rugby Africa Gold Cup defending champions, won the match in style in front of their home supporters at the Hage Geingob Stadium on Saturday.
The win for Welwitschias against the Tunisians put them in the right direction of retaining the trophy they have won four times since 2014. It also puts them on the path to qualify for the 2019 Rugby World Cup in Japan.
On Saturday afternoon, the Namibian team ran in 18 tries and converted 14 times for an impressive whitewash against their North African opponents.
Namibias right-wing Lesley Klim opened the scoring as early as the second minute of the match and Cliven Loubser made no mistake from the spot.
In the 10th minute, Namibias captain Johan Deysel led by example as he showed character to score his teams second try which Loubser converted.
Klim once again showed his dominance and ran in his second try of the match in the 14th minute to take their lead to 21-0.
Tunisia had a chance of bringing themselves back into the game when the referee awarded them a penalty in the 19th minute, but their scrum half Hossem Khalfi failed to get the ball through the two sticks as he kicked wide.
The Welwitschias continued adding to their score with an on form Chrysander Botha scoring his first try in the 21st minute of the match but Loubser missed from the resulting spot kick.
The home team scored another try in the 27th minute through man of the match, Muharua Katjijeko and Loubser made no mistake from the spot.
Before the half time break, Namibia scored three more tries. First through Wian Conradie in the 31st minute, then the referee awarded a penalty try in the 35th minute while Johann Greyling rounded off the scoring with a try of his own in the 36th minute.
Loubser only managed to convert once from the two tries that were scored by Conradie and Greyling for a 52-0 halftime score.
In the second half, the much improved and more composed Namibian team continued causing havoc for their opponents by running in 10 more tries.
Namibias tries in the second half were scored by Greyling (3), Botha (2), Klim (2), with Pieter-Jan van Lill, Damien Stevens and Johan Tromp each scoring one.
Loubser missed two of the five conversions he took while Pieter Steenkamp converted twice and Botha once for the 118-0 win.
(NAMPA)
HK/PS/HP