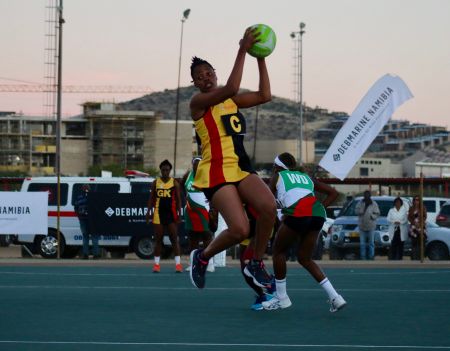 WINDHOEK, 11 JUN (NAMPA)  Namibias national senior netball team showed character and determination as they lost by a single point in their second match of the 2018 edition of the Debmarine Namibia Pent Series.
Namibia went down 51-52 against Zimbabwe, the defending champions of Netball Namibia (NN)s senior international netball tournament. Zimbabwe won the Debmarine Namibia Pent Series in its maiden season in 2017.
On Sunday at the Israel Patrick Iyambo Police College in Olympia, Windhoek, the defending champions brought their A-game keeping the home team at bay from the start of the first quarter.
The match between the two nations saw supporters on their toes after a nail-biting first quarter which ended 14-15 in favour of Zimbabwe.
The defending champions extended their lead in the second quarter with 13 points as Namibia lost ground and were unable to stop their fast plays as that quarter ended 20-33.
Namibia managed to win the third quarter where they outscored their opponents for the first time. Zimbabwe scored 10 points while Namibia scored 16 points, reducing the gap to seven points as the quarter ended 36-43.
Namibia once more won the last quarter after scoring 15 points to Zimbabwes nine, but their opponents lead in the second quarter was enough to win them the match with a 51-52 final score.
Namibia who has two teams competing against Botswana, Zambia and Zimbabwe has now won one game and lost another from their two matches played at the competition thus far.
The national senior teams next match will be against their development team called Namibia A on Monday at 17h00.
Speaking to the media after the game, Namibias team coach, Manuel Tjivera said losing by a single point against Zimbabwe showed how much the team has improved since last years competition.
Once again, the girls applied what was told to them and I am happy that we lost by a single point which shows that the hard work we put in is paying off, he said.
Zimbabwes captain, Perpetua Siyachitema said the game against Namibia was tougher than they expected.
Namibia was a tough opponent today because they brought their A-game; we undermined them ahead of the match. But I am happy to see that this competition is improving the game in the region, she said.
(NAMPA)