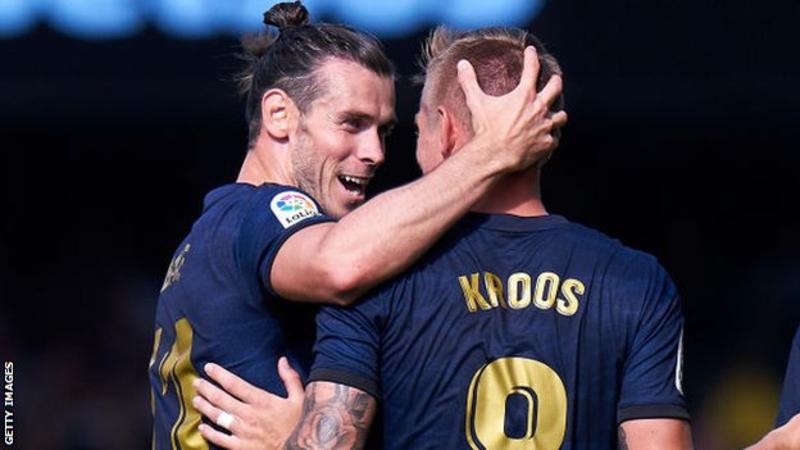 Zinedine Zidane said Gareth Bale is "going to stay" at Real Madrid after the Welsh forward set up Karim Benzema's opening goal in a 3-1 victory at Celta Vigo.

Bale was a surprise starter after being linked with a move away from the club this summer, but was involved in Madrid's best moments and Zidane insisted it was always his plan to play Bale in this game.

"He's going to stay and we all have to think of that as a positive thing," manager Zidane said.

"The injury to Eden Hazard was bad luck for us but it didn't change the plans we had for Bale in this game.

"Gareth and everyone else here is going to show this shirt the respect it deserves."

Bale had already tested Celta keeper Ruben Blanco with a rasping shot before delivering a pinpoint cross for Benzema to touch home after 12 minutes.

Celta responded well and thought they had equalised on the stroke of half-time, but Brais Mendez' effort was disallowed for offside by the video assistant referee.

Toni Kroos doubled Real's lead with a sensational 25-yard strike off the underside of the crossbar, shortly after Luka Modric was sent off for a late challenge on former Arsenal loanee Denis Suarez.

Despite going down to 10 men at Estadio Municipal de Balaidos, Real scored a third when Lucas Vazquez finished off a flowing move late on.

Celta's second-half substitute Iker Losada netted a consolation for the home side, beating Thibaut Courtois with a fierce shot in stoppage time.

La Liga champions Barcelona lost their opening league game of the season on Friday, going down 1-0 to Athletic Bilbao