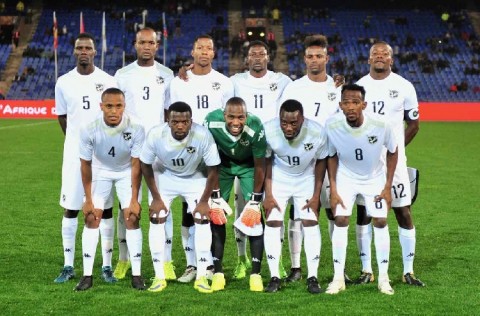 The Brave Warriors take on Morocco on Saturday, 27 January 2018.

CASABLANCA - Having already achieved their 2018 African Nations Championship objective, the Brave Warriors will be in search of more history on Saturday when they face host Morocco in a highly-anticipated quarter-final clash at the Mohamed V Stadium in Casablanca.

Initially, the Brave Warriors just wanted to register a win at the tournament, and then attain qualification for the quarter-finals. Now that they are part of the last eight, they can see the semi-finals on the horizon “so why not?” Mannetti asked after Namibia and Zambia drew 1-1, a result that saw the Brave Warriors paired with Morocco.

There is still enough left in the tank to go with a growing ambition to wade into unchartered territory, he said.

“Being in the quarter-final is something very good for the entire Namibian nation. This is a big moment for Namibian football. It's our first time at this tournament and we managed to reach the quarter-finals,” Mannetti said.

Namibia have not gotten this far through luck. Theirs has been a methodical approach to games combined with sheer determination.

He added that Namibia will not park the proverbial bus against the offensive minded Moroccans, but will “play smart and try to effectively execute the tactic for the game.”

Only fellow southerners Zambia could breach the Brave Warriors' shields when playing to 1-1 draw in the final group match, a statistic that Mannetti says is down to “good tactical organisation”.

It took Namibia until the final Group B match against Zambia to play with freedom and take the game to their rivals. Staying compact and defensively sound was the order of the day in back-to-back 1-0 wins over Ivory Coast and Uganda.

“With Morocco, don't think we are just here to enjoy, no ways. Please don't misinterpret me. We would be very wrong to just go and play loose football. We really want to make sure that Morocco and the rest of Africa take notice of Namibian football in the structured and fun way that we have showed you,” explained Mannetti, who anticipates a highly charged atmosphere for Saturday's encounter.

“I explained to them [players] the occasion awaiting them on Saturday when they face Morocco in Casablanca at this big stage and see if we can spoil their party.”

For their part, the hosts know that victory for them is non-negotiable for an expectant home audience.

Head coach Jamal Sellami rested all but one of his regulars in the 0-0 draw against Sudan on Sunday.

He is confident his decision to play a much-changed side will serve the African Nations Championship hosts well.

“We gave an opportunity for the substitutes to play and we didn't get any yellow cards and nobody was injured,” he told journalists.

“This was important for us for the next stage.

“We will continue our preparations to win against Namibia. We are playing at home, we are being supported by all Moroccans, and we must give our all to win this competition,” Sellami said.

Zambia face Sudan in the second quarter-final of the day at the Stade Marrakech, in Marrakech.

On Sunday, Nigeria are up against Angola, who were the last side to book their spot in the knock-out stage, in Tangier, while Congo-Brazzaville face 2014 champions Libya in Agadir.

The much vaunted Video Assistant Referee technology will make its debut in African football at this stage of the competition.

It has been trialled with mixed reviews at the Fifa Confederations Cup and Fifa Club World Cup last year as well as in the Italian Serie A and German Bundesliga this season and debuted in England last week.