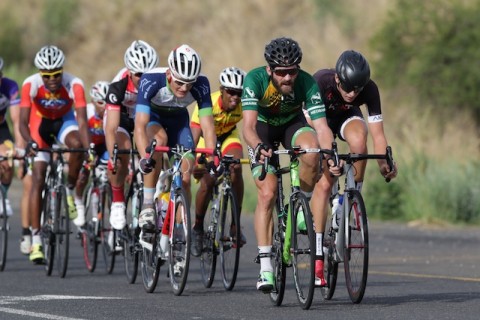 Dan Craven leads the peleton during the National Cycling Championships.

Craven, who was the national champion in 2015 and 2016, expressed this sentiment on Sunday after competing in the Pupkewitz Megabuild road cycling championships.

Despite finishing third on Sunday, the decorated cyclist, who last rode for Union Cyclist International (UCI)'s professional continental team Israel Cycling Academy, said he was happy to see that the level of cycling in Namibia is growing very fast.

“It is amazing to see 10 guys all sprinting to the finish line after 145 kilometres of cycling. This shows the level of cycling has come up. There were amazing riders, especially the development riders,” he added.

Craven finished as a runner-up in 2006 at the African Championships, and finished in seventh place at the B World Championships time trial in Cape Town in 2007.

He said the future of cycling in Namibia is bright if young riders continue to excel in the competitions they partake in.

“Today, we had two young guys who finished first and second, which is a good sign for the sport. There are opportunities for them if they want to go to Europe, and I hope they will continue with the hard work,” he noted.

Craven said he will always be available to help and guide young athletes where he can if they want to pursue their cycling futures elsewhere.

In the elite women's category, Vera Adrian beat Michelle Vorster in a sprint to retain her title.