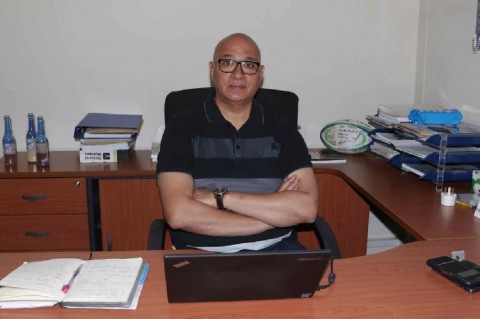 Mervin Green has been appointed as the CEO of Namibia rugby.

THE Namibia Rugby Union on Thursday announced that Mervin Green has been appointed as the new CEO of Namibia Rugby Limited (NRL).

NRL is a new company being formed which will take care of all the national teams and the High Performance activities, which includes the NRU's National Academy.

Green is a highly experienced rugby administrator and served as South Africa Rugby's General Manager for Strategic Performances for the past five years while he has also been the secretary general of Rugby Africa for the past 10 years.

In both these roles he has developed a close working relationship with the Namibia Rugby Union and in an interview with The Namibian Sport on Thursday he said he was well acquainted with Namibian rugby.

“For the past 15 years SA Rugby has been heavily involved in terms of technical or governance support and we've always been there for Namibian rugby. My role was just to provide a link through the African secretariat so I've been quite busy the past three years travelling up and down between Cape Town and Windhoek,” he said.

Green, however, admitted that the task at hand was bigger than he thought.

“This job will take much more time than I thought and I still have to make a decision on whether I'll continue as the secretary general of Rugby Africa, but luckily the NRU president Bradley Basson also serves on that board, so Namibia's interests will still be represented there.”

Green said it was important to strengthen rugby from school level through to club and national level, in order to follow a proper player development pathway to the national team.

“Namibian schools rugby is quite strong, but for it to improve it is necessary to take it to other communities where rugby basically is non-existent. Also, the traditional rugby schools are not playing so often anymore, so we have to look at that. South African schools, for instance, already start playing in February, but here nothing happens till April,” he said.

Regarding club rugby, Green said it was imperative to get more sponsors involved.

“At the moment only three clubs, Unam, Wanderers and Western Suburbs, have FNB as a sponsor, and they are dominating the club scene. We need to expand that relationship with FNB to see if the other clubs can also be supported, because currently they will never be able to compete on an equal footing. So that's a challenge we have to take up and I would like to invite the corporate world to come on board. If we manage to do that I believe club rugby will grow and become strong again,” he said.

He added that they had to strengthen community links between schools and clubs.

“In South Africa we started school-club linkages where the clubs basically take care of the schools in their communities and assist them with administration while the schools are a feeder system for the clubs, so thats an area we can still improve a lot on over here.

Green added that capacity building and training would also be high on the agenda.

“World Rugby is very pleased with the establishment of the National Academy last year and we already saw the improvement of the national u20 side at the Junior World Rugby Trophy. Namibia's performance was eye-catching and this year I think they will get closer to playing in the final or winning the tournament. So it will be critical to have the National Academy properly staffed and sourced with equipment and programs.

“We need proper coaches to improve the skills levels so that we can create a clear pathway and feed into the senior levels of the Welwitschias through to the national team.

“In South Africa we trained at least 5 000 coaches, referees or administrators per year, so we are very strong on capacity building and we have to improve that in Namibia. I believe they are there, but they must just get proper coaching. My view is that all school coaches should at least have a minimum World Rugby qualification.

He added that qualification for the 2019 Rugby World Cup will be one of the main priorities this year.

“We can't be complacent and just think that we will qualify, but we have a plan in place and national coach Phil Davies will arrive next week. There is also a High Performance consultant from World Rugby here who will run a programme from next week with (assistant national coaches) Roger Thompson and JP Nel,” he said.

Regarding the new company, NRL, Green said the aim was to take Namibian rugby to a more professional level.

“The objective of NRL is to take care of professional rugby in Namibia. World Rugby has identified three African countries and the plan is to take them to a more professional level. They will also receive more financial support, but they want to see better returns on their investment.

“So it must be run professionally and managed as a business. Once we get that started we will negotiate with our sponsors and they will be more comfortable to invest. It will be a non-profit organisation so all profits we make will be ploughed back into the game,” he said.

He said he was excited about his appointment and looking forward to the challenge.

“I have always been passionate about Namibian rugby and I have established a great relationship with the Namibian rugby community. The people are great and I think I'll be able to contribute and take the game to the next level.”