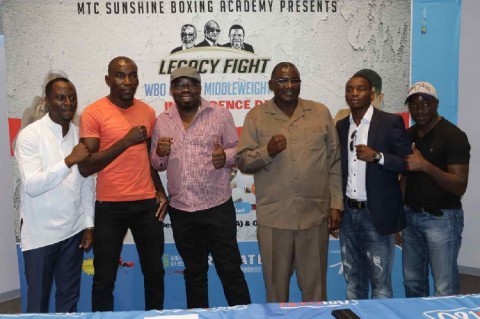 WALTER Kautondowka will top the 'Legacy Fight' Independence Celebration boxing bonanza bill at Ramatex on 20 March when he defends his WBO Africa middleweight title against Billi Godoy of Argentina.

“For the past 17 years we've been celebrating Namibia's independence with our Independence Celebration boxing tournaments and this one will be no different, although it will be special, because we will honour our first three Presidents in the 'Legacy Fight,' he said, adding, “it's important for our youth to understand and follow our history.”

Regarding Godoy, Tobias said that although he is not an African and cannot challenge for an African title, the main purpose of the fight will be to improve Kautondokwa's world rating.

“The fight has been sanctioned by the World Boxing Organisation, and if Walter wins, his world rating will improve. He is already ranked fifth in the world and I'm sure he will win,” he said.

The 31-year-old Godoy is an experienced boxer with a record of 36 wins, of which 17 came via knock out, and four losses.

Kautondowka is two years older than Godoy, although he is much less experienced, with just 16 fights under his belt. He has, however, been explosive in the ring, winning all 16 his fights to date, of which only one has gone the distance.

There will be four other fights on the undercard, with Harry Simon Junior taking on Andreas Nghinananye; Timoteus Shuulula taking on Tinkani Kamanga of Malawi; Paulinus Paulus taking on Alick Mwenda of Malawi; and Max Ipinge taking on Ihangwa Philipus.

The entrance fee is N$500 for VIP tickets and N$50 for general tickets.

The deputy minister of information and communication technology, Stanley Simataa, who was the guest of honour at the launch, congratulated Tobias and the MTC Nestor Sunshine Academy for their hard work over the years, and called on the boxers to ensure that they win their fights.

“You have decided to honour the legacies of three legends, three men of honour, so we cannot let them down by losing any of the three title fights on the card.”

“Although they will be facing tough opponents from Argentina, Tanzania and Ghana, we exhort them to emerge victorious, because they will not only be fighting for themselves, but also to sustain Namibia's legacy,” he said.

Simataa added that boxing had elevated Namibia's standing in the 'league of nations,' while it has contributed to the Namibian economy by bringing marginalised people into the economic mainstream and by creating opportunities for further development.