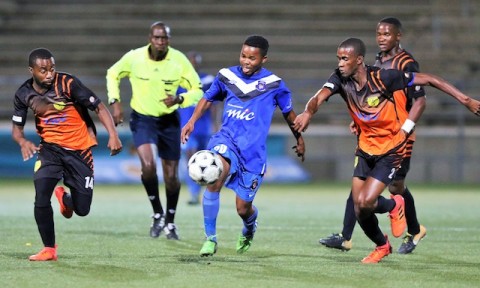 Llewellyn Stanley of Tigers in action against Tura Magic.

NAMIBIA Premier League champions Tigers FC have released eight players with promising youngster Brendon Kotungondo the only arrival to the club as they bid to rescue a faltering season.

“We would like to thank each and every ex-player for their service, and wish them well in their future careers. The release of the players was necessitated by the bloated squad and the endeavours by the club to bring down the operational costs,” Tigers public relations officer Hafeni Hiveluah said in a statement on Wednesday.

A disastrous start to the season has left Tigers in the relegation zone, just four points above bottom side Young Chiefs, who have played three matches more.

Tigers' ongoing feud with the NPL resulted in the team making a delayed start to the campaign, and this has cost them dearly.

A decision on whether they will forfeit six points for boycotting the first two matches of the season - against fellow strugglers Citizens and sixth-placed Unam - remains pending, with the NPL expected to deliberate on the matter this weekend.

“It is an agenda item on the upcoming BoG [NPL Board of Governors] meeting at Swakopmund on 10 February 2018. We shall only know after that meeting. From our side, we still feel, as from the onset, that we have a good case,” Hiveluah told The Namibian Sport.

Nonetheless, and to avoid being caught napping once again, they have been among the busiest NPL clubs thus far with Friday's transfer window deadline looming.

Mighty Gunners is the other club to have dipped into the market, bringing in Elmo Kambindu Ukondja from Life Fighters, and Rundu Chiefs pair Barnand Arnoldus Horaseb and Katuesa Mangundu.

Young Chiefs, the only other club to do business thus far, have recruited Pius Akapeke Thomas from Foxy Senior Football Club.