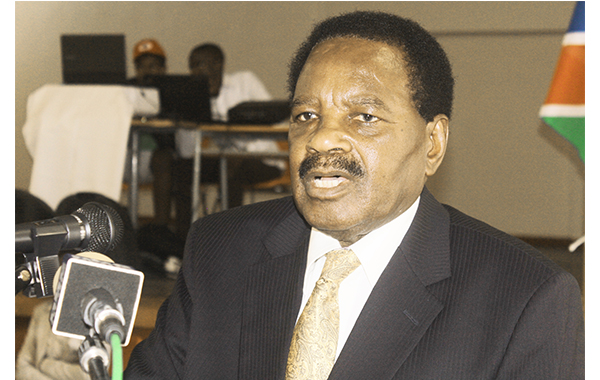 VICE president Nickey Iyambo yesterday said fathers who refuse to take responsibility for their children are cowards.
He was speaking at the opening ceremony of the 3rd Government Forum on Electronic Identity in Africa (ID4Africa) annual conference, taking place at a Windhoek hotel.

The three-day conference, which has attracted over 800 delegates from 43 African states, is being held under the theme 'Pathways to Digital Identity'.

Iyambo said the absence of fathers in their children's lives was a key contributing factor to overcome in order for children to be registered, and to obtain national identification documents.

“Fathers are cowards, it is a fact, we run away. Things are only good at the beginning, but when birth comes, poof, gone,” he stated.

Iyambo said when Namibia was colonised, some people were told how old they were, based on how they looked. This has now caused problems, as many elderly Namibians are not able to access a state pension because their documentation states that they are still too young.

However, Iyambo praised the health ministry for digitalising the national population register, which combines birth, identification, marriage and death registers into one database.

As per the Harambee Prosperity Plan, Namibia still needed to establish a unique and universally verifiable electronic identity profile, as well as expand its national population registration system (NPRS).

Iyambo explained that establishing an NPRS would allow electronic transactions, inter-operability between government institutions, identity verifications, data exchanges and the roll-out of social protection programmes via a digital interface.

“Such unique IT solutions will enable government institutions to accurately verify their identity data against what is contained in the national population register, thereby preventing fraudulent identity profiles,” he noted.

Iyambo said Namibia was ready to create these electronic identities as per an assessment done through the Namibia civil registration system by the Wold Bank last year.

“The relevant ministries will this year commence with stakeholder consultations to work out a suitable implementation plan by 2018. It is my fervent hope, as per the axiom of our President, that nobody in Namibia should feel politically, socially and economically left out as we rededicate ourselves in the fight against poverty and economic inequality,” he added.

Home affairs minister Pendukeni Iivula-Ithana, who cut the ribbon to officially open the ID4Africa expo, said Namibia has made immense progress, and announced that a new border management system would be commissioned in September. She said an electronic passport will also be introduced shortly afterwards, while the electronic birth notification system will also be launched soon.

The executive chairman of ID4Africa, Joseph Atick, said during the past two annual gatherings, expectations had been raised about what needs to be delivered by African governments.

“We need to deliver on those expectations. We already discussed what Africa needs,” he said, adding that on the last day of the conference, the next host for ID4Africa would be announced.

ID4Africa, which was launched in 2014, held the inaugural conference at Dar es Salaam, Tanzania, in 2015 and the second one at Kigali, Rwanda, in 2016, and is a tripartite initiative drawing together 43 African governments, 20 development agencies and 100 private companies.

The initiative believes that if African states have proper identity systems in place, development outcomes and socio-economic conditions would improve for many Africans, who are deprived of services because they have no identity documents.