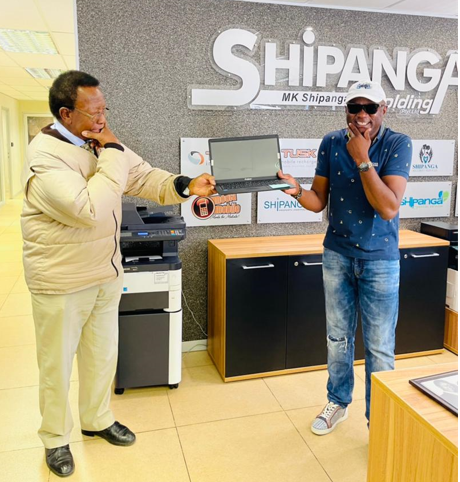 Mitiri Festus Muundjua reached out to Founder & Executive Chairman of Shipanga Holdings, Mr. Martin Kaali Shipanga recently and in doing so mentioned that his laptop had reached end of life.

Wasting no time Mr Shipanga put a plan in action to ensure he could surprise Mitiri with a brand new laptop as a way to show appreciation for Mitiri being a good teacher and mentor to him.

He did this with no hesitation as Mitiri is not only his former principal but his mentor as well. Mr Shipanga further mentioned that Mitiri has done so much to not only shape his life and many others but also continue to play a role as a father to him.

Mitiri was gifted with a brand new modern laptop to continue to read as the historian and teacher that he always will be - in response mitiri handed Shipanga with a picture with his Former teacher Mr Martin Lazarus Shipanga, who taught Mitiri Muundjua at Augustineum in Okahandja with many of our prominent leaders such as President Geingob, Theo-ben Gurirab, Hidipo Amutenya and many others.

When Mitiri was informed about the new laptop he said that it was the most exhilarating news and that he never had an iota of doubt that this would happen.

We are happy to put a smile on Mitiri’s face, God bless our educators