City Police on Tuesday instructed about 10 alleged illegal settlers to dismantle their structures and vacate the open area in the 7de Laan informal settlement. 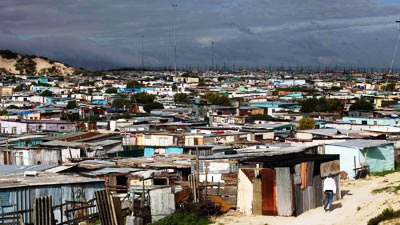 City Police on Tuesday instructed about 10 alleged illegal settlers to dismantle their structures and vacate the open area in the 7de Laan informal settlement.
The shacks were located along Düsseldorf street, which has been identified as an area prone to illegal settlers because of its easy access to the road.
Speaking to the media at the site, City Police Senior Superintendent, Gerry Shikesho said according to the security guard stationed there, the structures were erected on Monday night.
City Police had put the security guard there a few months ago to protect area from illegal settlers.
Shikesho said the settlers are strategic in their approach.
“Their structures are already complete and so they simply put a bed in it and claim to have been there for the past three weeks but it’s a lie and we know it,' he said.
City Police thus instructed the settlers, some of whom were part of the about 100 onlookers present, to dismantle their structures or the officers will do it with force.
The verbal instructions resulted in the settlers following the order,.
Affirmative Repositioning founder and land activist -Job Amupanda - who arrived at the site some time later,
questioned City Police as to why they were removing the people without a court order.
The police then asked Amupanda not to interfere and instructed him to join the onlookers.
Amupanda in the process informed the illegal settlers that the police admitted to not having a court order and raised concern with regard to parts of a legal document that was in 2013 ruled as unconstitutional.
“The Squatters Proclamation of 1985 says that when there is a bed you can not go. It is an inhuman thing to do and they need a court order, ” Amupanda charged.
On his part, Shikesho said they are simply doing their job.
“When something is illegal I don’t need a court order to enforce the law,” he said.
He said they are aware of the Supreme Court ruling that the destruction of a house and removal of contents is against Namibia’s Constitution but that is not what they did.
Speaking to Nampa at the site, several of the settlers said the operation was unfair towards them, while land is handed out to property developers who make huge profits.
They said they have been informed that the land will be serviced for development.