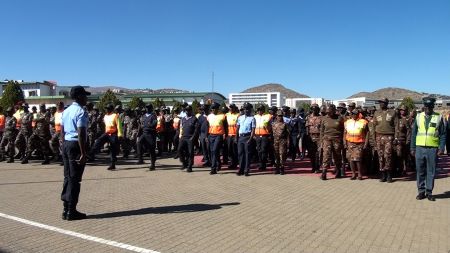 (NAMPA)  Fifty-seven people with outstanding traffic fines were arrested between last Thursday and Sunday in the Khomas Region.
This was announced by Khomas crime investigations coordinator, Deputy Commissioner Abner Agas at a media briefing here Monday to update the public on work done by Operation Kalahari Desert in the region between 06 and 09 June.
Agas said summonses were issued to 14 people for driving without a drivers licence, while N.dollars 2 000 in fines were issued to two drivers for driving without professional authorisation. Four people were arrested for drunk driving, while one was arrested for overloading.
Agas further said two vehicles were impounded after the drivers fled the scene on foot due to outstanding warrants of arrest, while the police also arrested three people after they were found in possession of suspected stolen washing powder worth N.dollars 12 936. It is alleged that a truck driver was supposed to deliver the boxes at a company at the coast, but he instead took it to Katutura in Windhoek.
The Namibian Police Forces Khomas Regional Commander, Commissioner Joseph Shikongo meanwhile said 11 people were arrested for possessing cannabis.
The increase in the use of drugs in the country is a worrisome issue. Namibia was previously used as a transit country with drugs just passing through to be consumed in other countries, but now Namibians are using those drugs, said Shikongo.
(NAMPA)