The Government Institutions Pension Fund opened its new office at Eenhana in the Ohangwena Region. 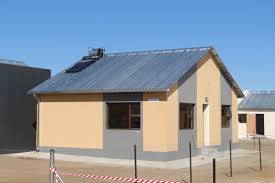 Fund members in the region previously had to travel to its offices at Ondangwa and Oshakati and clients will, amongst others, be able to get advice on their pensions, do biometric registration and verification, receive benefit and income statements and submit supporting documents at the new office.
In a speech read on his behalf, Ohangwena Governor Usko Nghaamwa said the opening of the office means an end to the days people of Eenhana, Helao Nafidi and Okongo had to travel 210 kilometres to the nearest GIPF office in the Oshana Region to access their services.
At the same event, the chairperson of the GIPF Board of Trustees, Goms Menette said the growing population of the region necessitated GIPF increasing its footprint, noting that the branch has been operational since January this year and has thus far aided over 500 members.
GIPF’s membership currently stands at over 135 000 in the form of active members and annuitants, Menette said.
NAMPA