Home >Blogs >shipifm's blog >Jazz-fest lives up to its billing

Jazz-fest lives up to its billing 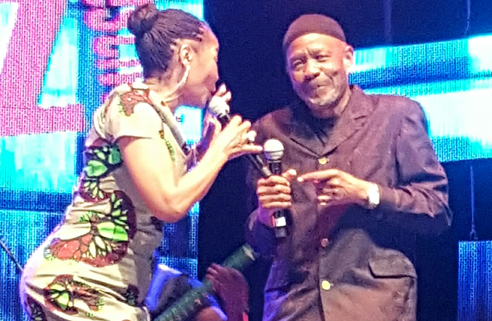 People from all walks of life enjoyed one of the finest and smoothest genres on the music scene. The audience included first citizens President Hage Geingob and Monica Geingos.

Despite Namibia Annual Music Awards (NAMAs) best male artist of the year Big Ben stealing the night with hit songs Moro Moro and Number 6 in the Juke Box, festival-goers were treated to thrilling moments by South African jazz musician Nathi Mankayi, as well as Letta Mbulu and Caiphus Semenya. Caiphus and Letta shared the stage at some point to sing together on duets.

Letta touched the audience’s hearts when she performed one of her hit songs, Music in the Air, and also wowed the audience into a sing-along of one of her old time favorites, I need your love. Confident, energetic and of course with his golden voice, Caiphus first performed one of his hit songs, Fire, which was taken well by revelers who started screaming non-stop for more. Referring to Namibian people as the best singers in singing along with him, especially on one of his hits Angelina, Caiphus could not hide his happiness in being in Namibia, promising the audience to come back.

Namibia’s own jazz diva, Suzy Eises, made her presence felt performing three of her songs including Harambee, which she dedicated to Geingob. Suzy also introduced vocalist Lady T, who had fans craving for more.

Well known for its local jazz music, the All Fu Jazz Band also did well on their songs Africa and What’s Your Name, before performing cover versions of Push and Pull, Siwelewele and Boom Boom, sending fans into ecstasy.

Nathi Makhayi had the audience in the palm of his hand performing some of his new and old hits like Nomvula, Noba ngumama, Noma kanjani and Ndezenjani.

Roman and Julian Wassefur from Germany, and Elisa Rodrigues from Portugal also did not disappoint. Chikune and Swingerz Jazz Band made sure the crowd enjoyed their soothing music.