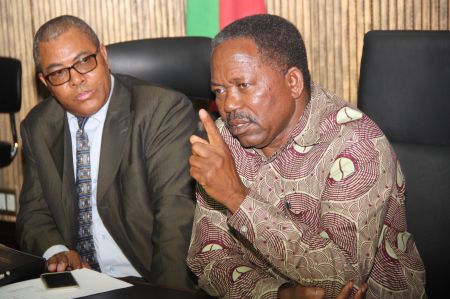 Minister of Home Affairs and Immigration, Frans Kapofi, on Monday said the ministrys employees should protect their integrity and that of their families by refraining from corrupt practices in order for them 'to work with a clear conscious'.
Kapofi made these remarks on Monday during the opening ceremony of the KHAEDU Project in the capital, which is expected to run until 23 August.
The project is spearheaded by Namibia Institute of Public Administration and Management, in collaboration with the Ministry of Home Affairs and Immigration as well as the High Commission of South Africa, and is meant to address issues faced facing that are similar to those of its South African counterpart.
Kapofi said the most pressing issue the ministry is facing is fake passports being issued unlawfully by the ministrys officials without following the correct procedures, which compromises their integrity and that of the ministry.
If your work ethic is compromised, you will never have peace because you will always have a guilty conscious. Protect your integrity and your family. The British government is also worried about the use of our passports, so lets protect it, if our country becomes the source of illegal practices, then what is the use of having laws and regulations in place? questioned Kapofi.
At the same occasion, South African ambassador to Namibia, Archie Whitehead, said Namibia and South Africa are facing similar problems of corrupt immigration officials who do not have the best interest of their countries but rather want to attain personal wealth.
[The] training of immigration officials on service delivery is not good enough. There should be training of good morals as well and there should be social cohesion. Immigration officials attitudes will determine what visitors will feel about the country and this is crucial with tourists, said Whitehead.
He urged that these problems should not just be addressed by the two countries alone but also at regional level as part of the Southern African Development Community.
NAMPA