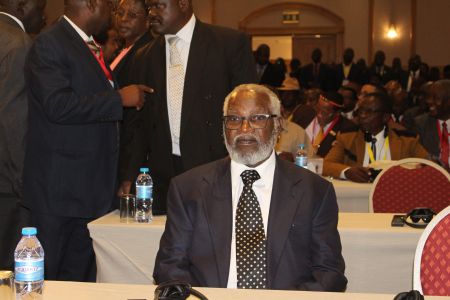 Namibians owe Founding President Sam Nujoma an immeasurable debt of gratitude, President Hage Geingob said while commemorating Nujomas 90th birthday on Sunday.
At a very young age, he took up the fight and the struggle against the illegal occupation of Namibia by the apartheid South African regime, Geingob said in a media statement issued by State House.
Namibias independence bears the imprint of Nujomas heroic deeds and a life of commitment to the liberty and unity of the Namibian people, the president said.
He further described Nujoma as a visionary leader, a freedom fighter and courageous Commander of the Peoples Liberation Army of Namibia.
Under Nujomas leadership, Geingob added, Namibians were able to have a better life.
However, the journey of prosperity and inclusive growth as part of our second struggle for economic emancipation remains incomplete, he stated.
Geingob said Namibia is eternally grateful for the solid foundations Nujoma laid in an independent Namibia for people to pursue a life of dignity and equality.
On behalf of the Government of the Republic of Namibia and her people, I would like to wish our beloved Founding Father a ha