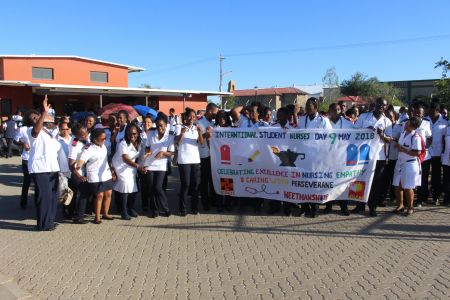 The Namibia Nurses Union (NANU) on Sunday condemned the suspension of the national health training centres under the Ministry of Health and Social Services where enrolled nurses, pharmacist assistants and environmental health practitioners have been training.
In a media statement issued by NANU Kunene regional coordinator Junias Shilunga, NANU labelled the decision by the government to close down the training centres as reckless.
This recklessness has just proved what we always doubted, that the government is not committed to safeguarding the health of its citizens and has no plan to rescue the healthcare sector which is on the verge of collapsing, it stated.
Health Minister Kalumbi Shangula recently announced the suspension of the training centres during President Hage Geingobs town hall meeting at Ongwediva.
Its irresponsible of the government to close down these institutions with the reason of lack of funds after millions having been spent on reckless expenditure, while the health sector continues to limp on its knees, it reads.
NANU called on the government and the Ministry of Health and Social Services to reconsider its decision to close down such progressive institutions.
The union rather wants the government to take in a limited number of students as a cost-saving measure and give the nation a good quality health care system.
Responding to questions sent by Nampa on Sunday, Health Ministry Executive Director, Ben Nangombe said there is a rational plan behind the decision to suspend the centres.
It would have served them well had they sought clarification before making wild statements, said Nangombe.
He explained that the centres were established for a specific purpose of which training is not the core business.
There are other local institutions training the cadres mentioned, including the University of Namibia, which is funded by the State. It serves no purpose to duplicate efforts, Nangombe said.